US to investigate Ferguson policing practices

Justice department move a response to killing of Michael Brown 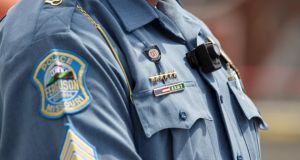 Racial disparities in Ferguson’s police force were blamed for the killing of Michael Brown on August 9th. About two-thirds of the city’s population of about 20,000 are African-American, while the 53-strong Ferguson police force has just four black officers. Photograph: Whitney Curtis/The New York Times

Police in Ferguson, Missouri, are to be investigated by the US justice department into policing practices in response to last month’s killing of an unarmed black teenager by a white police officer that sparked days of racial unrest.

The department is to start a broad civil rights investigation into the police in the suburb of St Louis where Michael Brown (18) was shot at least six times by police officer Darren Wilson (28) on August 9th after he stopped the teenager and a friend for jaywalking.

“This is not a stop-gap or short-term solution,” US attorney general Eric Holder said, announcing the investigation. “It’s a long-term strategy, founded on community policing, that will provide a detailed roadmap to build trust.”

The investigation would look at the Ferguson police department’s use of force, including deadly force, and analyse stops, searches and arrests to ensure there had been no violations under the US constitution or federal law.

Eye-witnesses to the killing of Michael Brown said he had raised his hands to surrender before he was shot, though police have disputed this. Mr Wilson has told police investigators that he was acting in self-defence after Brown reached for the officer’s gun and a scuffle ensued in the police car.

Mr Wilson has been placed on administrative leave from the police force but has not been charged with any wrongdoing.

The killing, seen by local residents as an incident of white police brutality, set off days of violence on the streets of Ferguson. Police were condemned for exacerbating tensions with their heavy-handed response to demonstrators by using military-strength force.

Racial disparities in Ferguson’s police force were blamed for the killing. About two-thirds of the city’s population of about 20,000 are African-American, while the 53-strong Ferguson police force has just four black officers.

The investigation will analyse the conduct of Ferguson police over the past several years, looking at whether police have a track record of discrimination or the misuse of force beyond the Brown killing. It may also look at the conduct of other police departments in the St Louis area.

The inquiry is known as a “pattern or practice” investigation which the department has under US attorney general Eric Holder used 20 times to investigate misconduct at police departments.

It will scour for evidence of repeated violations of the civil rights abuses.

Such investigations are permitted under a 1994 federal law which was introduced after the videotaped beating of African-American motorist Rodney King by Los Angeles police officers that set off riots.

Ferguson police chief Thomas Jackson welcomed the investigation. “We have no intentional policies or procedures which discriminated or violated civil rights. But if we have anything there which may unintentionally do that, we need to know about it,” he told the New York Times.

The investigation was expected since Mr Holder visited Ferguson last month to meet community leaders in a bid to ease tensions.

The Washington Post, which first reported the department’s new inquiry, said that at least 34 other police forces are under investigation over allegations of civil rights abuses in police misconduct.

In April, the Albuquerque police department in New Mexico was the subject of a scathing review by the justice department’s civil rights division over the use of lethal force more than 20 times since 2009.

The department’s report concluded that in most of the shootings Albuquerque police repeatedly used excessive, lethal force violating the constitutional rights of citizens when there was no imminent threat.

US launches air strikes on Iran-backed militia site in Syria 20:45
Report on West Berlin’s paedophile rings ‘the tip of the iceberg’ 20:00
EU says it will co-operate closely with Nato and US on security and defence 19:45
Salmond says Scotland’s ‘leadership failed’ in harassment allegations 19:44
Saudi crown prince approved killing of Jamal Khashoggi, US report says 18:57

3 Priest’s hand-made replacement will did not revoke original will, judge rules