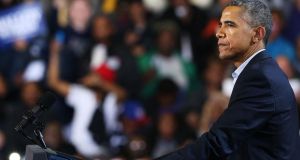 The White House has refused to enforce a 2002 law giving effect to the parents’ wishes so as to maintain the US government’s neutral position on Jerusalem as Israel’s capital because it interferes with the president’s authority to maintain foreign policy. Photograph: Spencer Platt/Getty Images

The nine-judge court argued with lawyers yesterday in a case taken by an American family who want their son, born in Jerusalem in 2002, to have his birthplace listed as “Israel” in his passport.

Congress passed a law that same year giving the parents of US children born in Jerusalem, the holy city claimed by Israelis and Palestinians, the right to have their place of birth listed as “Israel. ”

The White House refused to enforce the law, maintaining the US government’s neutral position on Jerusalem as Israel’s capital because it interferes with the president’s authority to maintain foreign policy.

Ari and Naomi Siegman Zivotofsky sued the US government to have the birthplace of their son Menachem recognised as Israel. The government challenged this, arguing it would undermine its neutrality on whether Israel or Palestine controls the city.

A lawyer for the family, Alyza Lewin, argued in the case’s second appearance before the Supreme Court that the identification of “Jerusalem, Israel” as the birthplace of the now 12-year-old boy in a passport was “not a political declaration”.

“If you’re an American citizen born in Northern Ireland, you can’t get the right to say Ireland. This is a very selective vanity plate law, if we might call it that,” said the judge.

“An American citizen born in Northern Ireland doesn’t have this option just because he thinks that’s part of Ireland,” he said.

The politically sensitive case puts US diplomatic relations in the Middle East and the foreign policy roles of the president and Congress under a spotlight over a rule in place since Israel was founded in 1948.