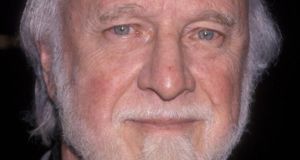 Richard Matheson, author of 1954 horror novel I Am Legend and The Shrinking Man, has died. He was 87. Photograph: Getty

US science-fiction and horror author Richard Matheson, whose novels and stories, including I Am Legend and The Shrinking Man, were adapted for the big screen and television, has died, the Writers Guild of America said today. He was 87.

The Writer’s Guild, of which Matheson was a member, did not announce where or when the author died nor a cause of death.

Matheson, who was born in Allendale, New Jersey, in 1926 and raised in Brooklyn, New York, first began publishing science-fiction and horror stories in the 1950s.

His 1954 horror novel I Am Legend is considered a landmark work in the genre, ushering in zombies and apocalyptic themes to post-World War Two America. The novel was adapted three times as a film, most recently in 2007 as a big-budget thriller starring Will Smith.

Matheson also wrote the teleplay Nightmare at 20,000 Feet in 1963 for The Twilight Zone television series. The episode, which stars William Shatner, has become a much-referenced TV classic with a famous shot of a gremlin peering into the window of the plane from its wing.

The author wrote the screenplay for 1971’s Duel, one of director Stephen Spielberg’s first films.

He was credited as a writer on at least 80 film and television productions over his career spanning seven decades, according to the Internet Movie Database.