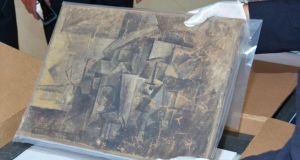 US authorities returned a stolen $15 million Picasso painting La Coiffeuse to France on Thursday, nine months after it was found in a FedEx shipment listed as a $37 handicraft.

US immigrations and customs enforcement director Sarah Saldana turned over the 1911 cubist oil painting to French officials in a ceremony at the French embassy. “We’re so glad that it’s going to be shown to the world again,” Ms Saldana told reporters.

La Coiffeuse, or The Hairdresser, was last displayed in 1998 in Munich, Germany, and was returned to the National Museum of Modern Art in Paris. The museum reported it stolen from its archives in 2001.

Following a lead, customs agents found the painting in a December 2014 FedEx shipment from Belgium to Newark, New Jersey. The shipping label described the contents as a handicraft worth $37.

Officials declined to comment on the investigation into the theft. Two experts from the Paris museum authenticated the painting in January.

Previous art repatriations to France have included works by Edgar Degas, Camille Pissaro and Andre Breton. The homeland security investigations unit of US customs has returned more than 7,800 items to their home countries since 2007, the agency said in a statement.