US prisoner released after four decades in solitary confinement 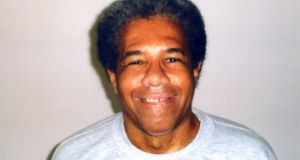 Undated picture of Albert Woodfox. Woodfox, who spent a record 43 years in solitary confinement in a US prison. Photograph: Amnesty International/AFP/Getty Images

The last of three black inmates who spent decades in solitary confinement in Louisiana’s notorious Angola prison was released on Friday after pleading no contest to manslaughter in the 1972 death of a prison guard.

Albert Woodfox served more time in solitary confinement than any prisoner in US history, according to his attorneys, after being convicted of killing Brent Miller at the Louisiana State Penitentiary in Angola.

He was ordered released from jail after his no contest plea, attorney Katherine Kimpel said.

Woodfox was picked up from the West Feliciana Parish Jail, where he had been most recently held, by his brother.

“Concerns about my health and my age have caused me to resolve this case now and obtain my release with this no-contest plea to lesser charges,” said Woodfox, who turned 69 on Friday.

Woodfox maintained his innocence in a statement released by his attorneys.

“I hope the events of today will bring closure to many,” he said.

He spent more than four decades in prison in isolation, his attorneys noted.

Another inmate convicted for Miller’s death was released in 2013 and died three days later.

A third inmate, who also spent much of his sentence for another crime in isolation, was released years ago.

The men were dubbed the “Angola Three” and their cases drew international condemnation.

He was convicted twice of Miller’s murder, but both convictions were ultimately thrown out in court.

Louisiana state prosecutors had sought to try him a third time.

The Angola prison was once a part of a Deep South plantation and was known for seething racial tensions and harsh treatment of inmates.