US faces worst droughts in a thousand years, scientists say 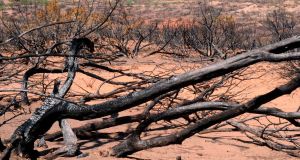 A scorched mesquite tree is seen among the thousands of acres that burned from wildfires during a severe drought outside Jayton, Texas, in 2011. Photograph: Elliott Blackburn/Reuters

The US south-west and the Great Plains will face decade-long droughts far worse than any experienced over the last 1,000 years because of climate change, researchers said on Thursday.

The coming drought age - caused by higher temperatures under climate change - will make it nearly impossible to carry on with current life-as-normal conditions across a vast swathe of the country.

The droughts will be far worse than the one in California - or those seen in ancient times, such as the calamity that led to the decline of the Anasazi civilizations in the 13th century, the researchers said.

“The 21st-century projections make the (previous) mega-droughts seem like quaint walks through the garden of Eden,” said Jason Smerdon, a co-author and climate scientist at Columbia University’s Lamont-Doherty Earth Observatory.

Researchers have long known that the south-west and Great Plains will dry out over the second half of the 21st century because of rising temperatures under climate change.

But this was the first time researchers found those droughts would be far worse even than those seen over the millennia.

The years since 2000 give only a small indication of the punishment ahead. In parts of Arizona, California, Nevada, New Mexico, Oklahoma and Texas, 11 of those years have been drought years.

As many as 64 million people were affected by those droughts, according to Nasa projections.

Those conditions have produced lasting consequences. In California, now undergoing its fourth year of drought - and the worst dry spell in 1,200 years, farmers have sold off herds. Growers have abandoned fields.

Cities have imposed water rationing, but future droughts could be even more disruptive, because they will likely drag on for decades, not years.

“We haven’t seen this kind of prolonged drought even certainly in modern US history,” Mr Smerdon said.

The study, Unprecedented 21st-Century Drought Risk in the American Southwest and Central Plains, was published in a new online journal Science Advances

The researchers said the effects of drought would likely be exacerbated by population growth in the south-west and rising demands for water.

Already current demands for water - for agriculture and for daily life - have drastically reduced groundwater sources in California and across the south-west.

Under the current warming trajectory, the south-west and Great Plains could expect to see chronic water shortages, making it impossible to carry out farming and ranching under current methods.

“Given the likelihood of a much drier future and increasing water resources demand, groundwater loss and higher temperatures will likely exacerbate the impacts of future droughts, presenting a major adaptation challenge,” the paper said.

The researchers used data derived from tree rings, whose growth patterns show the effects of dry and wet years, sampled across North America, and soil moisture, rainfall and evaporation records, and 17 climate models to study the effects of future temperature rise on the region.