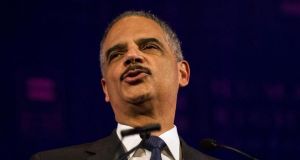 US attorney general Eric Holder has announced widespread changes within the US justice department to benefit same-sex married couples, such as recognizing a legal right for them not to testify against each other in civil and criminal cases.

The changes, unveiled by Mr Holder in a speech to a gay rights lobbying group in New York last night, are designed to continue the push for gay rights in the nation after a US Supreme Court ruling last year said the federal government cannot refuse to recognize same-sex marriages carried out in states that allow them.

Gay marriage is permitted in only 17 of the 50 US states, as well as the District of Columbia.

US law has long included a “spousal privilege” that protects communications between a husband and wife so that they cannot be forced to incriminate one another in court.

In addition to extending the privilege to same-sex couples in situations involving the Justice Department, Mr Holder told the Human Rights Campaign that he plans to put same-sex couples on the same legal footing as opposite-sex couples in other areas, including how certain debts are handled in federal bankruptcy proceedings and visitation policies at federal prisons.

“In every courthouse, in every proceeding, and in every place where a member of the Department of Justice stands on behalf of the United States, they will strive to ensure that same-sex marriages receive the same privileges, protections, and rights as opposite-sex marriages under federal law,” Mr Holder said in excerpts of the speech released in advance.

The Supreme Court in June struck down part of a 1996 federal law, the Defense of Marriage Act, which barred the federal government from recognizing same-sex marriages.

Edith Windsor, a lesbian widow, sued after the government forced her to pay additional estate taxes because it did not recognize her marriage.

Since then, president Barack Obama’s administration has aggressively implemented the ruling in contexts such as immigration and federal employee benefits.

Mr Holder will also make same-sex married couples equally eligible for death benefits paid to the surviving spouses of law enforcement officers who have died on duty and for benefits from the September 11th victims’ compensation fund, according to the speech excerpts. The Justice Department runs both programs.

“The news that the Justice Department will extend sweeping recognition to ‘marriages’ of same-sex couples, even in states that do not recognize such unions, is yet another illustration of the lawlessness of this administration,” Tony Perkins, president of the Family Research Council, said in a statement.

Mr Perkins noted that while the Supreme Court last year required the federal government to recognize same-sex marriages in states that allow them, the justices were “conspicuously silent on the status of such couples when they reside in a state which considers them unmarried.”

“The Obama administration’s haste to nevertheless recognize such unions in every state actually runs counter to the Windsor decision’s emphasis on the federal government’s obligation to defer to state definitions of marriage,” he added, referring to the Supreme Court ruling in the United States v Windsor case.

Comparing the gay-rights movement to the civil rights movement of the 1960s, when Robert Kennedy served four years as attorney general, Mr Holder said it was important for his department to act.

“As attorney general, I will not let this department be simply a bystander during this important moment in history,” he said, according to the excerpts.