US executions drop as concern over costs and prosecutions rise 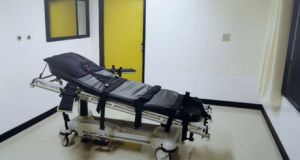 Executions in the United States are decreasing due to concerns about costs, flawed prosecutions and shortages of drugs needed to carry out lethal injections, the Death Penalty Information Center said in a report today.

There have been 39 executions carried out in the United States in 2013, down from 43 executions in each of the past two years, the group - a well-regarded source of death penalty data - said in its annual report.

The number of people sent to the death chamber has been on a general decline since 1999, when 98 people were executed. “The realisation that mistakes can be made, and innocent people have been freed who could have been executed - that causes jurors to hesitate. Prosecutors know it is harder to get a death sentence,” the centre’s executive director, Richard Dieter, said.

The last planned execution in the United States for 2013 took place on Tuesday in Oklahoma, when the state killed by lethal injection a man convicted of stabbing and beating a horse trainer to death in a case of mistaken identity.

The centre said so far this year 80 individuals were sentenced to death, fewer than the 315 death sentences meted out in both 1994 and 1996, representing recent historical high numbers.

The 2013 tally was also the lowest for a single year since the US supreme court reinstated capital punishment in 1976. About 60 per cent of Americans say they favor the death penalty for convicted murderers, polling group Gallup said in October.

Gallup said the number marks the lowest level of support it has measured since November 1972, when 57 per cent were in favor. Death penalty support peaked at 80 per cent in 1994.

Mr Dieter said the decline in death sentences has been accompanied by an increase in sentences of life imprisonment without parole. “Jurors like that option,” he said.