Could Trump’s diagnosis help his chances of re-election? 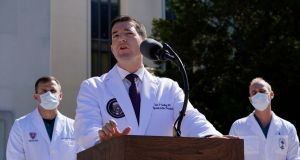 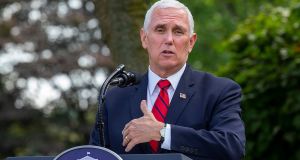 As the sun set in Washington DC on Friday night, supporters had already gathered outside the Walter Reed Medical Center to where US president Donald Trump had been admitted a few hours earlier.

Throughout the weekend, people carrying Trump 2020 flags flocked to the makeshift vigil site along a busy freeway leading north out of Washington DC into the Maryland suburbs.

One supporter, Daniel Kiely, a third-generation Irish-American whose family come from Tarbert, Co Kerry, had come to show his support for the president.

A former Democrat, he says he likes Donald Trump’s policies, even if sometimes his style can be grating. “He’s here to protect the constitution of the United States, law and order... he can be a little over the top at times, but he has to, because of all of the invective that has been foisted upon him. He’s only in defence mode,” he says.

Though mostly white, the crowd here is demographically diverse, with children and several immigrants present. Two women – one from southeast Asia, the other from Dubai – are wrapped in American flags, and extol Trump’s patriotism.

Salaih Hudayar and his father are holding a home-made banner with the words: “Uyghurs wish you to get well soon.” They moved to the United States as refugees from Xinjiang in China 20 years ago.

“President Trump and his administration have effectively been doing a lot for our people,” Salaih tells me over the honking horns and traffic whizzing by. “Three years ago, before president Trump, nobody really knew about the Uyghurs. But under president Trump, the US government has been raising our issue at international forums, speaking out against atrocities, passing the Uyghur act, and sanctioning Chinese officials.”

Trump re-election officials will be hoping that displays of support like these will help boost a campaign that has lost its star attraction less than a month before election day. The president, who thrives on adulation, retweeted scenes from outside the hospital and reportedly sent out chocolates to supporters on Friday night.

After Saturday’s bungled communication message when White House doctor Sean Conley was forced to issue a clarification on his suggestion that Trump had been diagnosed 72 hours previously and chief of staff Mark Meadows told reporters that the president’s condition was graver than had been presented, Trump tweeted a four-minute video from the hospital.

While the objective of the clip may have been to rally his supporters, it was also designed to show that this was a president still firmly in control and dismiss any talk of a transfer of power. Two photographs of the president were circulated to the press late on Saturday with the tagline “President Donald J Trump works from Walter Reed,” showing Trump reviewing documents.

Vice-president Mike Pence remained at his residence in DC throughout the weekend, participating in a campaign conference call on Saturday.

The constitution states that Pence would succeed Trump if the president became “incapacitated”. But even while the White House was keen to stress that the president remained in command, there are questions around Pence’s own status.

While he tested negative for Covid-19 on Friday and Saturday, he attended the White House event announcing Amy Coney Barrett’s nomination on September 26th. A number of those present have since tested positive for the virus, and it is entirely possible that Pence could yet test positive too.

Despite this, the campaign says he will go ahead with Wednesday night’s vice-presidential debate with Kamala Harris in Utah, and will campaign in Arizona on Thursday.

In the meantime, the Trump re-election team announced “Operation MAGA [Make America Great Again]” to keep the campaign “on full speed”. Campaign manager Bill Stepien – who has himself contracted Covid-19 – said he wanted to encourage “all of the president’s supporters to pick up the banner themselves by volunteering in our grassroots army for Trump, flying their Trump flags, putting out more yard signs, and wearing their MAGA gear proudly”.

The militaristic language was seen by many as a disturbing call to arms, given the recent protests by Trump-supporting armed civilians in Portland and elsewhere, and the president’s controversial call for the Proud Boys neo-fascist group to “stand back and stand by” at last Tuesday’s debate with his Democratic opponent Joe Biden.

But any hope that Trump’s convalescence could give his campaign a boost in the final four weeks of the campaign may be wishful thinking.

A series of polls this weekend shows that Biden’s lead has increased as election day nears.

According to an NBC-Wall Street Journal poll, Biden is now 14 points ahead nationally, up from 8 per cent last month. The poll was taken after Tuesday night’s debate but before the president was diagnosed with Covid-19. Similarly a New York Times-Siena College poll, which began surveying people on Wednesday, put Biden ahead in the two key battleground states of Pennsylvania and Florida.

While Trump’s diagnosis may serve to focus attention away from his conduct at last Tuesday’s debate, he still has a lot of ground to make up if the polls are to be believed.