US east coast braces for worst snowstorm in generations 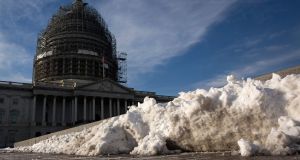 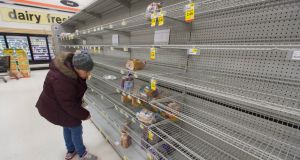 A customer looks at the heavily depleted bread section in a supermarket as shoppers prepare for an approaching snowstorm in Alexandria, Virginia. Photograph: Michael Reynolds/EPA

The Washington DC area is bracing itself for heavy snowfall and high winds in what would be, if forecasts prove to be accurate, the worst winter storm to hit the region in generations.

Meteorologists issued a blizzard warning for the US capital and Baltimore in anticipation of the extreme Mid-Atlantic storm forecast to arrive on Friday afternoon (evening in Ireland) and to continue until Sunday. New York is on a blizzard watch for Saturday morning.

At least five states and the District of Columbia declared a state of emergency as the US east coast prepares for a storm that could affect more than 75 million people, about a quarter of the US population, in a region stretching more than 1,500 kilometres from Arkansas in the south up to southern New England.

The National Weather Service has warned about threats to life and property, and expects the storm to dump up to 30 inches (76 cm) of snow. Flights and rail services have been cancelled in advance.

Washington and its suburbs are expected to take the brunt of the storm.

At least 30 million people live in the areas under blizzard warning with winds of up to 90 kilometres per hour expected to blast the region.

The Washington Metropolitan Area Transit Authority, which operates the second-busiest subway system in the country, will stop running trains and buses from late on Friday until Sunday. The agency that runs the DC Metro said the move was “unprecedented”.

“This is not a storm that anyone should take lightly, and I would urge all residents to plan to get to a safe place before the storm arrives on Friday afternoon,” said WMATA general manager Paul Wiedefeld.

Airlines began making preparations for the storm on Thursday, cancelling thousands of flights at airports in the Washington area and North Carolina, including major hubs at Dulles near Washington and Charlotte operated by United and American Airlines respectively.

The US government announced on Thursday night that federal offices will close at 12 noon on Friday. Schools were also closed for the day in preparation for the storm.

Supermarket and grocery stores were emptied of produce by residents rushing to stock up on food and supplies. Shoppers shared photographs on social media of long queues and bare shelves.

In a move that didn’t inspire confidence ahead of the storm, about two inches of snowfall on Wednesday evening brought Washington and its suburbs to a standstill during rush-hour traffic.

There were numerous accidents on treacherous roads in the city and on the Beltway commuting thoroughfare that circles Washington.

Even the President’s limousine, nicknamed “The Beast,” and his motorcade had to navigate the city’s icy roads slowly. His commute from Andrews air force base to the White House took more than 70 minutes, almost three times longer than normal, as he returned from a trip to Detroit.

White House press secretary Josh Earnest said that the journey was a “reminder of how much the President is going to miss having access to Marine One” - his presidential helicopter - “a year from now.”

In an unusual move, DC mayor Muriel Bowser apologised at a press conference for the chaos caused by the light snowfall.

“We are sorry for an inadequate response. We did not provide the resources and we should have been out there earlier,” she said.

The heavy snow forecast for the area could surpass the Knickerbocker blizzard of 1922 that dumped 28 inches on Washington DC. The storm’s name came from a theatre in the city where 98 people were killed when its flat roof collapsed under the weight of the snow.

The most recent storms to hit the city in December 2009 and February 2010, more popularly known as ‘Snowmageddon’ and ‘Snowpocalypse’, dropped 16 inches and almost 18 inches respectively.