US considers use of ground troops against IS in Iraq

Top US general says troops may be necessary 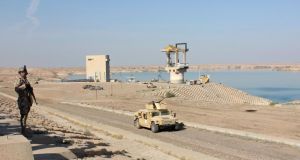 Iraqi security forces in a sweep against IS militants north of Baghdad yesterday. Iraq will need about 80,000 troops to retake the terrain it lost to IS, a top US general said yesterday. Photograph: Reuters

The top-ranking officer in the American military said yesterday the United States is actively considering the direct use of troops in the toughest forthcoming fights against the Islamic State (IS) in Iraq, less than a week after President Barack Obama doubled troop levels there .

Gen Martin Dempsey, chairman of the joint chiefs of staff, indicated to the House of Representatives armed services committee that the strength of IS relative to the Iraqi army may be such that he would recommend abandoning Mr Obama’s oft-repeated pledge against returning US ground troops to combat in Iraq.

Retaking the critical city of Mosul, Iraq’s second largest, and re-establishing the border between Iraq and Syria that IS has erased “will be fairly complex terrain” for the Iraqi security forces that the US is once again supporting, Gen Dempsey acknowledged.

“I’m not predicting at this point that I would recommend that those forces in Mosul and along the border would need to be accompanied by US forces, but we’re certainly considering it,” he said.

As Gen Dempsey and US defence secretary Chuck Hagel testified, IS released a new audio message purported to be from its self-proclaimed leader Abu Bakr al-Baghdadi, an apparent refutation of suspicions that Baghdadi was killed or critically injured in air strikes over the weekend.

, designed to aid Iraqi campaign planning against IS and to prop up 12 Iraqi and Kurdish brigades, US troop levels in Iraq will soon stand at 3,000.

Even with potential US involvement in ground combat looming, Gen Dempsey and Mr Hagel said further troop increases would be “modest” and not on the order of the 150,000 US troops occupying Iraq at the height of the 2003-2011 war.

“I just don’t foresee a circumstance when it would be in our interest to take this fight on ourselves with a large military contingent,” Gen Dempsey said.

But should the Iraqi military prove unwilling to take back “al-Anbar province and Ninewa province” – the majority of territory in Iraq seized by Islamic State – or should new Iraqi prime minister Haider al-Abadi exclude Sunnis from power, “I will have to adjust my recommendations,” Gen Dempsey said.

He has previously described Mosul as potentially the “decisive” battle of the war against IS, an assessment backed by Gen Lloyd Austin, the US central command chief who is running the war. Gen Austin signalled last month that an Iraqi-led campaign was months away, owing to insufficient combat prowess on the Iraqis’ part.

Representative Buck McKeon, the retiring California Republican who chairs the panel, said he would not support a congressional authorisation for the war against IS that ruled out direct US ground combat.

“I will not support sending our military into harm’s way with their arms tied behind their backs,” he said, predicting an authorisation explicitly preventing ground combat would be “DOA in Congress”.

Mr Hagel said he did not “know specifically what they will propose” in terms of language for the authorisation, which Mr Obama said he would seek after last week’s midterm elections drubbing which has handed Republicans control of Congress. – (Guardian service)