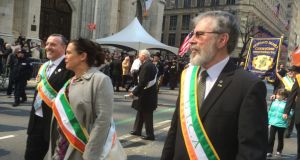 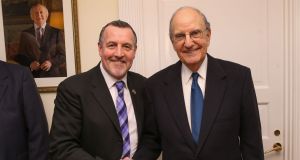 New York and New Jersey congressmen will introduce and support a Bill in Congress next week aimed at postponing the deportation of a former Irish National Liberation Army (INLA) prisoner from the US.

The decades-long legal fight by Malachy McAllister (57), who lives in Rutherford, New Jersey, to remain in the US culminated last month in the Belfast man receiving notification from the US Department of Homeland Security to “surrender for removal” on April 25th.

Mr McAllister was told in a letter of March 23rd to report to a deportation office in Newark, New Jersey, with “a small travel bag” and was warned that he may be arrested if he failed to show up.

Bill Pascrell, who represents Mr McAllister’s congressional district in New Jersey, plans to introduce a Bill in the House of Representatives this week to delay the deportation order.

New York congressman Joe Crowley, a Democrat, and Peter King, a Republican, stressed the potential political implications of Mr McAllister’s deportation in a call on Monday with US Immigration and Customs Enforcement director Sarah Saldana.

“It would send a terrible message to men and women who took risks for peace on all sides,” Mr Crowley told The Irish Times, pointing to Mr McAllister’s support for the peace process and the Good Friday Agreement.

Politicians were engaged in a “full-court press” with the Obama administration to block Mr McAllister’s deportation, he said.

Senators Robert Menendez of New Jersey and Chuck Schumer of New York are also supporting Mr McAllister who had a meeting with Irish diplomats at the consulate in New York on his case on Friday.

“We understand that there is a timeline here and we need to move quickly,” Mr Crowley said.

Mr McAllister was denied political asylum in 2003 but has remained in the US under annual deferral actions including through the application of his son, a US citizen.

The former republican was jailed for seven years for two INLA attacks on RUC officers during the 1981 hunger strikes. He was released in 1985 and said he took no further part in paramilitary activity.

In 1988, Mr McAllister fled the North for Canada after a gun attack by Loyalist group, the Red Hand Commandos, on his Belfast home while he was abroad on holiday.

He moved to the US in 1996 and runs a construction business in New Jersey and an Irish pub in Manhattan.

He serves on the New Jersey state board of the Ancient Order of Hibernians and was an aide to the Grand Marshal of the 2010 New York St Patrick’s Day parade, then New York police commissioner Raymond Kelly. This year, he walked in the parade alongside Sinn Féin president Gerry Adams and vice-president Mary Lou McDonald.

Mr McAllister believes he is being targeted for “stupid” acts he committed as a young man for which he served time.

“I want to put this behind me and get on with my life,” he said.

He suspects his proposed removal may relate to a new investigation by the recently established Historical Investigations Unit into the 1988 attack on his home. He received an early-morning call several weeks ago informing him that the cold case was being reopened.

The 2012 report by Desmond Lorenz de Silva into collusion in Northern Ireland found that Brian Nelson, a loyalist agent of the British security forces, had been supplied by his military handlers with a photograph of Mr McAllister used by the loyalist group to target him in 1988.

“Why all of a sudden has this happened since all of this information is coming out on collusion?” said the Belfast man.

Mr Crowley said Mr McAllister may have fallen into a category of undocumented immigrants with a criminal past being targeted as a push forward with president Barack Obama’s proposed deferred actions against the parents of children who are US citizens or residents.