US blizzard: Clean up begins as storm retreats leaving 29 dead

Residents of the US East Coast begin to dig their way out of snow after near-record snowfall blanketed the region. Video: CCTV 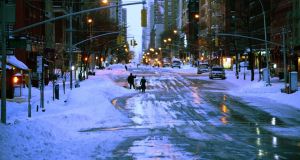 Pedestrians walk on Amsterdam Avenue on Sunday in New York city. Most of New York’s streets were cleaned up overnight after a huge snow storm hit the mid-Atlantic states. Photograph: Getty 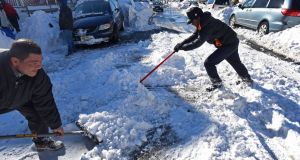 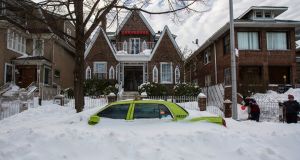 A vehicle covered in snow as residents shovel the sidewalk in the Queens borough of New York. A massive snowstorm that blanketed the East Coast moved out to sea on Sunday. Photograph: New York Times 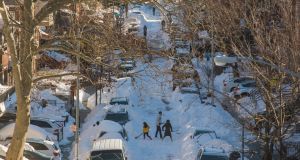 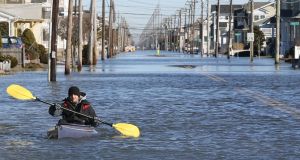 New York city has slowly emerged from a massive blizzard that paralysed much of the US east coast, while snowy gridlock gripped the nation’s capital and surrounding areas, where federal, state and local offices planned to remain closed on Monday.

Mid-town Manhattan sprang back to life on a bright and sunny Sunday as residents and tourists rejoiced in the warming sunlight, digging out buried cars, heading to reopened Broadway shows and cavorting in massive drifts left by New York City’s second-biggest snowstorm on record.

In Washington, where a traffic ban remained in effect, the recovery got off to a slower start, with the entire metropolitan transit system closed through Sunday. The US office of personnel management said federal government offices in the Washington area would be shut down on Monday, along with local government offices and public schools in the District of Columbia and its Maryland and Virginia suburbs.

Even so, many people were out in the street. Some skied and snowboarded down the steps of the Lincoln Memorial until security officials moved them on.

The monster weather system unofficially dubbed winter storm Jonas left at least 29 dead in several states, with most of the fatalities the result of traffic accidents.

The entire region seemed to breathe a sigh of relief that the worst was over.

Theatres reopened on Broadway after the blizzard forced them to go dark on Saturday on the recommendation of New York mayor Bill de Blasio.

“We still have some areas that we have to do a lot more work on. But we’ve come through it pretty well,” Mr de Blasio said on ABC’s Sunday program ‘This Week’. “We think we’ll be broadly up and running again at the city tomorrow.”

The blizzard was the second-biggest snowstorm in New York City history, with 68cms measured in Central Park by midnight on Saturday, just shy of the record 68.3cms set in 2006, the National Weather Service said.

At least 13 people were killed in weather-related car crashes in Arkansas, North Carolina, Kentucky, Ohio, Tennessee and Virginia on Saturday. One person died in Maryland and three in New York while shovelling snow.

Two died of hypothermia in Virginia, and one from carbon monoxide poisoning in Pennsylvania, officials said.

Reinsurance company Munich Re said it was too early to estimate property losses from the storm.

Most bus and subway services operated by the Metropolitan Transportation Authority were up and running again, officials said. The agency was working on restoring full service.

The MTA said on Sunday night that seven of the Long Island Rail Road’s 12 branches would be fully operational by Monday morning, with partial service restored to an eighth branch. Those branches serve nearly 80 per cent of the LIRR’s near 300,000 passengers.

A spokeswoman for the New York Stock Exchange said the market planned to open as usual on Monday. City schools also were set to open on Monday.

On the Upper West Side of Manhattan, grocery store shoppers picked their way through brown slush and over compressed snow and ice as they balanced their bags in their hands.

Drivers tried their best to free cars that were encased in snow, but often found themselves spinning their wheels. Outside the city, suburban New Jersey resembled Vermont.

Washington, which has a poor track record in dealing with snow, seemed unready for a return to its Monday routine after its largest snowstorm in decades, with major airports, public buses and subways completely shut down all Sunday. Metro trains were to begin limited service starting on Monday morning.

Washington mayor Muriel Bowser earlier issued a public apology for commuting headaches caused by the blizzard, which locals dubbed “Snowzilla.” She said crews had worked all night and Sunday, ploughing main roads and were just getting to secondary roadways and neighbourhoods.

Public schools were slated to be closed on Monday across much of the Washington and Baltimore region, with some shuttered through Tuesday.

All federal offices were to be closed on Monday and the US House of Representatives cancelled its voting until February 1st. The Pentagon cancelled all its events.

Nevertheless, walkers, sledders, some cars and the occasional cross-country skier ventured into the dazzling white Washington landscape under a bright sun.

More than 3,900 airline flights were canceled on Sunday, and some 900 were called off for Monday, according to aviation website FlightAware.com.

About 150,000 customers in North Carolina and 90,000 in New Jersey lost electricity during the storm, but most service had been restored by Sunday afternoon.

1 Gardaí disperse crowds gathered at coastal beauty spots
2 Six counties free of new cases of Covid-19 over past week
3 How lockdown has helped us to save money - and find new ways to spend it
4 George Floyd death: sweeping protests see curfews in 22 US states
5 Cabinet to decide on Friday if travel curbs can be lifted early
Real news has value SUBSCRIBE