Two of Berkeley injured due to return home within a week 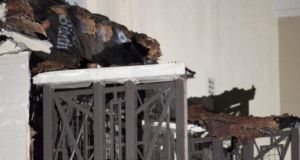 A view of the collapsed fourth-floor balcony in Berkeley, California. Photograph: Peter Dasilva/EPA

A month on from the Berkeley balcony collapse, two more students of the seven injured in the tragedy are awaiting final medical approval to travel and hope to return to Ireland within the coming week.

The students are due to meet doctors and expect to be able to return from California as preparations take place for two events in San Francisco and Berkeley to mark the one-month anniversary of the accident and to remember the six students killed in the tragedy.

The Irish Immigration Pastoral Centre in San Francisco, which provided support to the families of the deceased and injured, is holding a mass in St Philip’s Church in the city tonight at 7pm local time.

The mass will be celebrated by Fr Brendan McBride of the pastoral centre who was on hand to assist the families after the tragedy.

A month’s mind commemorative vigil will be held on Sunday evening in the same public square where hundreds of Irish J-1 students in the San Francisco area attended a vigil a day after the accident. The event is being organised by the Irish Consulate in San Francisco.

Although expecting to be well enough to travel back to Ireland, the two students - Niall Murray and Jack Halpin - hoping to return within the coming week are facing further treatment and rehabilitation after they arrive home.

Sean Fahey (21) from Rathmines in Dublin is the only one of the seven Dublin students injured in the balcony collapse who has returned to Ireland. He flew home the week after the accident.

Conor Flynn (22), from Mount Merrion, was released from hospital but has been unable to fly since then due to an injury to a lung.

He has been living in rented accommodation with this family in the San Francisco Bay Area since being discharged from hospital.

The remaining five injured students are being treated at four hospitals in or around the city.

Jack Halpin (21), also from Rathmines, who received injuries to his legs, an arm and his back in the fall, has been receiving treatment in a hospital in Walnut Creek, east of Berkeley, since the accident.

Mr Halpin’s family have said that he has a long and complicated rehabilitation ahead of him involving complex and intensive physiotherapy and that modifications will need to be made to his home.

Niall Murray (21), from Rathfarnham, suffered serious injuries to an arm and a leg, and has been treated in two hospitals in San Francisco specialising in care for his different injuries in recent weeks.

Clodagh Cogley (21), from Milltown, suffered collapsed lungs, a broken shoulder and knee, broken ribs and a broken spinal cord. She has said on Facebook that the chances of her using her legs again are bleak. She is being treated in Santa Clara, south of San Francisco.

Hannah Waters (21), from Castleknock, is being treated in the same hospital and will also be undergoing rehabilitation as she recovers from her injuries.

Aoife Beary (21), from Blackrock, suffered a serious head injury in the accident. Her family said on Monday and that “all going well” she will move from a hospital in Stanford to the same hospital where Ms Cogley and Ms Waters are being treated.

Head of EU’s top science agency walks out of post 18:50
China closes border with Russia as Covid-19 threat shifts 18:23
Coronavirus: Over 7,000 UK deaths in total, up 938 in a day 18:18
EU top court orders Poland to suspend disciplinary chamber 17:50
Bernie Sanders drops out of Democratic race for US presidential nominee 17:18