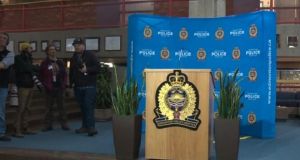 Scene of press conference by police in Edmonton Canada where nine people have been killed. Screengrab.

Police in Canada are investigating the deaths of seven adults and two young children at three separate but connected Edmonton-area crime scenes.

He said the victims included a woman found by officers responding to a weapons complaint at a south Edmonton home.

The bodies of three more women, two men, a boy and a girl were discovered a few hours later at a north-east home where officers had checked on reports of a suicidal male earlier in the evening.

A man matching the description of the suicidal male was found dead in a restaurant in the Edmonton community of Fort Saskatchewan, Mr Knecht said.

Windows and doors of a Vietnamese and Chinese restaurant in Fort Saskatchewan were blown out and the restaurant is encircled with police tape, according to a Canadian media report.

The city is the capital of the province of Alberta, whose oil sands are the largest source of US crude oil imports.

The killings may be the worst crimes Edmonton has seen since June 2012, when Travis Baumgartner killed three fellow armed guards as they reloaded automated teller machines in the city.