Trump pledges to make America great ‘for all Americans’

During his first state of the union address US president Donald Trump hailed a "new American moment." However, this phrase has been used in a speech before, by Hillary Clinton in 2010. Video: Reuters/US Council on Foreign Relations 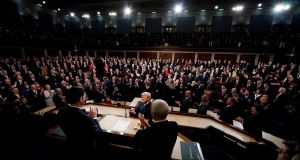 US president Donald Trump delivers his State of the Union address to a joint session of Congress in Washington on Tuesday night. Photograph: Jim Bourg/Reuters

US president Donald Trump pledged to make America great “for all Americans” in his inaugural State of the Union address, though he failed to offer substantial detail on many of his policy promises.

In a speech that strove to send a message of unity, Mr Trump claimed that “there has never been a better time to live the American dream” as he set out the achievements of his first year in office.

Chief among these was tax reform, as he claimed that his administration had implemented the “biggest tax cuts and reforms in American history”.

His administration had created 2.4 million jobs, 200,000 of those in manufacturing, he added.

Noting that the stock market had “smashed one record after another, gaining $8 trillion in value”, he said that Americans would feel this upswing in their pensions and their retirement accounts.

While the president promised a $1.5 trillion infrastructure plan, he provided little detail of how this might be funded, amid expectations that it may contain a mixture of public and private funding as well as local and state money.

Similarly, he furnished little detail about his plans for trade policy, as he vowed that “the era of economic surrender is over”.

As American pundits assessed the president’s speech on Wednesday morning, a train carrying Republican members of Congress from Washington DC to Virginia for a political retreat collided with a truck.

All Congress members and their staff escaped serious injury, though one person travelling in the truck died, another was seriously injured and two congressmen were hospitalised for minor injuries.

In a statement, the White House said the administration’s “thoughts and prayers are with everyone that has been affected by this incident”.

Mr Trump was expected to attend the retreat as planned on Thursday, where he is due to address Republican House and Senate members ahead of what is expected to be a crucial few weeks for immigration reform.

The Senate must agree another short-term funding measure by next Thursday to keep the government open, with Democrats demanding that a deal be reached to allow so-called Dreamers – undocumented immigrants who were brought to the US as children – to remain in the United States.

Mr Trump addressed the immigration issue in his State of the Union speech, reiterating his commitment to consider a path to citizenship for 1.8 million Dreamers.

But he also warned that he would press ahead with his proposed border wall with Mexico and end the green card lottery system. “It is time to begin moving towards a merit-based immigration system – one that admits people who are skilled, who want to work, who will contribute to our society, and who will love and respect our country,” he said to cheers from Republicans.

Mr Trump delivered his 80-minute speech – one of the longest in history – to a packed chamber which included members of the House of Representatives and the Senate, four Supreme Court justices, and various dignitaries. His four adult children and wife Melania also attended.

Several Democrats boycotted the speech, while others wore scarves and butterfly pins designed to protest against Mr Trump’s immigration policies and highlight the plight of Dreamers.

“No regime has oppressed its own citizens more totally or brutally than the cruel dictatorship in North Korea,” he said, warning the country’s “reckless pursuit of nuclear missiles could very soon threaten our homeland”.

On Iran, he urged Congress to address the “fundamental flaws in the terrible Iran nuclear deal”. He also referred to the recent demonstrations in Iran, stating that America “stands with the people of Iran in their courageous struggle for freedom”.

Responding to Mr Trump’s inaugural State of the Union speech from a school in Massachusetts, Congressman Joe Kennedy III said the president had presented Americans with “one false choice after another” based on the premise that “in order for one to win, another must lose”.

Noting that the current administration had asked people to choose between “coal miners or single moms, rural communities or inner cities, the coast or the heartland”, he said: “We fight for both.”

1 Kanye West says he will run for US president in 2020
2 Trump vows to ‘safeguard’ America’s values in Fourth of July speech
3 Coronavirus claims one more life while 11 new cases reported in Republic
4 Bobby Storey: The IRA's planner and enforcer who stayed in the shadows
5 Covid-19: Travel restrictions to stay and 'green list' put on hold amid fears of second wave
Real news has value SUBSCRIBE