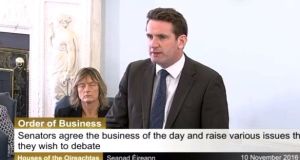 A video of Labour senator Aodhán Ó Riordáin reacting to the victory of US president-elect Donald Trump has gone viral after being posted on a number of US based websites and Facebook pages.

In the speech delivered in the Seanad on November 10th, the former equality minister and now senator Mr Ó Riordáin described Mr Trump as a fascist and said he was “embarrassed” by the Irish Government’s reaction to the election result.

“I can’t believe the reaction from An Taoiseach and from the Government and I don’t use the word fascist lightly but what else would you call somebody who threatens to imprison his political opponents?

“The best we come out with is a phone call to say is it still okay to bring the shamrock”, he added, referring to a phone call Taoiseach Enda Kenny had with Mr Trump in the wake of his victory in which Mr Trump confirmed the annual St Patrick’s Day ceremony in the White House would continue.

1 Aaron Brady, the man who said with pride he was a cop killer
2 Aaron Brady found guilty of capital murder of Det Garda Adrian Donohoe
3 Case of Covid-19 confirmed at community crèche on UCD campus
4 Make a Day of It: Get back into your favourite city centre, Dubs urged
5 A chronicle of dignity and despair
Real news has value SUBSCRIBE