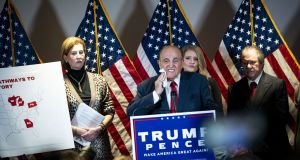 US president Donald Trump has escalated his attempts to overturn the result of November’s presidential election, inviting the leaders of Michigan’s Republican-controlled state legislature to the White House on Friday.

Michigan, like other states, must certify its results for the election before December 14th, when the electoral college meets. Democrat Joe Biden won the state in the November 3rd vote. But there are indications that Republican officials in states controlled by the party are coming under pressure from Mr Trump to declare him the victor in states where Mr Biden won.

The new focus on the certification process as states move to officially declare their results comes as the Trump campaign’s legal challenges in response to the election have failed in courts across the country. On Thursday, Mr Trump’s lawyer Rudy Giuliani announced that the campaign was withdrawing its lawsuit in Michigan. At a press conference in Washington, Mr Giuliani alleged that “massive fraud” had taken place in the election, claiming that he had “hundreds” of sworn affidavits from Americans who say they witnessed voter fraud. Sydney Powell, another Trump campaign lawyer, claimed that Mr Trump “won by a landslide”. “We are going to prove it. And we are going to reclaim the United States of America for the people who vote for freedom,” she said. They presented no evidence for their claims.

Speaking in Delaware following a meeting with a bipartisan group of governors about the coronavirus pandemic, Mr Biden criticised Mr Trump’s refusal to accept the outcome of the election, accusing the president of “incredible irresponsibility”.

An “incredibly damaging message is being sent to the rest of the world about how democracy functions”, he said, describing Mr Trump as “one of the most irresponsible presidents in American history”. His behaviour, Mr Biden said, is “not within the norm at all”.

Asked about the president’s decision to invite members of the Michigan state legislature to the White House, Mr Biden said: “We’ve won Michigan. It’s going to be certified.”

Mr Biden also did not rule out launching legal action against the General Services Administration, the federal agency which has not yet certified Mr Biden as the likely winner of the election, a decision that would give the incoming president access to resources and information.

“There is no excuse not to share the data and let us begin to plan,” Mr Biden said, warning that the situation will delay his work by a month or more. “How many lives will be lost as a consequence of that I can’t tell you.”

His comments came as the White House coronavirus taskforce held its first briefing in months. Vice-president Mike Pence thanked the American people for the sacrifices they have made in the battle against coronavirus, declaring that “America has never been more prepared to combat the virus than we are today”.

Outlining the work done by the Trump administration in this regard, he said: “We’ve continued to be on the same mission that we have been [on] throughout – to save American lives.”

Noting the rise in coronavirus cases and hospitalisations, he said that “we approach this moment with the confidence of experience”.

Mr Pence was speaking as the number of deaths from coronavirus in the US passed the 250,000 mark – the highest death toll of any country in the world.

On Thursday, the US’s top public health body, the Centres for Disease Control and Prevention, urged Americans not to travel for next week’s Thanksgiving holiday. It also recommended that those who travel should limit numbers for dinner and gather outdoors where possible.