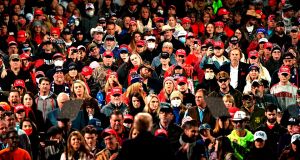 US president Donald Trump returned to the campaign trail this weekend, making unsubstantiated claims that he won the presidential election at a rally in southern Georgia.

Though the event was billed as a campaign event for two Republican senators facing re-election battles in a pair of run-off elections on January 5th, Mr Trump spent much of the evening lambasting state officials in Georgia and claiming the election had been stolen from him.

“They cheated and rigged our presidential election, but we’ll still win,” he said – sparking chants of “Stop the Steal!” from the crowd of around 10,000 people.

“We can’t let it happen again. Your governor could stop it very easily if he knew what the hell he was doing,” he added.

Mr Trump lost the state of Georgia in November’s election to his Democratic rival Joe Biden by 12,000 votes. Two recounts have not changed the outcome of the result, but the president is refusing to accept that he lost.

“If I lost, I would be a very gracious loser,” he said. “But you can’t even accept when they steal and rig and rob.”

Thousands of people began gathering for the 7 pm rally from lunchtime, many of whom were not wearing facemasks, despite elevated coronavirus infection numbers in the United States.

Mr Trump was accompanied by his wife Melania, who urged people to vote in the January 5th election.

Some Republicans are concerned Mr Trump’s attacks on the election system in the state will discourage some of their own supporters from voting in January’s run-offs. Mr Trump did ask voters to turn out on election day during the event, referencing the two senate candidates by name.

Both Republican candidates were present at the event, and addressed the crowd before the president’s arrival on Air Force One.

“If you vote, we will win. If you don’t we will lose America and what it’s founded on,” said Senator Kelly Loeffer who is facing a challenge from the Reverend Raphael Warnock.

Before his departure for Georgia, Mr Trump phoned Governor Brian Kemp and urged him to convene a special session of the state legislature and encourage state electors to vote for him rather than the winner Joe Biden. Mr Kemp refused. Aides said they also discussed the death of a family friend of Mr Kemp’s during the call, though the main topic was the election.

Tweeting before he left for Georgia on Saturday, the president attacked both Mr Kemp and Arizona’s Republican governor, another traditionally-Republican state that he lost: “Between Governor Doug Ducey of Arizona and Governor Brian Kemp of Georgia, the Democrat Party could not be happier. They fight harder against us than do the Radical Left Dems. If they were with us, we would have already won both Arizona and Georgia. We won more legal votes by far.”

“We’re certainly not going to move the goalposts at this point in the election. We are going to continue to follow the letter of the law, which gives us a very clear-cut direction as to how to execute an election,” he said in an interview.

He also added that he himself, as a conservative Republican, was disappointed by the result, but that the outcome would not be overturned. His office was investigating 250 claims of fraud, he said, “but right now, we don’t see anything that would overturn the will of the people here in Georgia”.

Meanwhile, top vaccine official Moncef Slaoui, who has predicted that 100 million Americans will be vaccinated by February, pushed back at the assertion by president-elect Biden last week, adding that he had seen no plan on how the administration of the vaccines would be organised.

“There are plans,” he said in an interview on Sunday. “We haven’t had a chance yet to sit down with the transition team and explain in detail everything that has been planned and been done. We look forward to that happening,” he said, adding that he expects a meeting to take place this week.

Leaders of the country’s military intelligence services are also expected to begin briefing the president-elect as early as Monday. Mr Trump announced on Friday he was withdrawing US troops from Somalia.