Exhibition to tell stories of women who underwent genital mutilation 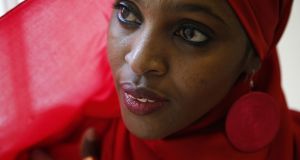 A photographic exhibition of women who underwent female genital mutilation (FGM) will open in Dublin on Saturday.

Faces of Defiance, a collection of portraits and personal stories of survivors of the practice, is part of a campaign aimed at eradicating FGM, which Unicef estimates is carried out on three million girls around the world every year.

“If we give positive images, and that’s not to get away from the reality of their experiences, women will come out and want to share their stories,” said FGM campaigner and survivor Leyla Hussein.

The exhibition, which portrays its subjects, all FGM survivors, not as victims but as strong, confident women, is a collaboration between Ms Hussein and photographer Jason Ashwood, with support from the Human Dignity Foundation and the Wallace Global Fund.

The exhibition includes a portrait of Irish-Somali survivor and campaigner Ifrah Ahmed, who has advised the Somali government on gender issues and runs her own foundation.

Three of the women featured will be attending the World Congress on Women’s Mental Health, which takes place at the RDS in Dublin next week. One of them, Jaha Dukureh, will be giving a keynote speech.

An estimated 200 million girls and women have been subjected to FGM in more than two dozen African countries, as well as in parts of Asia and the Middle East.

Prevalence varies between regions and countries, but in seven African countries it is almost universal (more than 85 per cent) and in four more the rate is more than 60 per cent.

The exhibition will open at 5pm on Saturday at the Clayton Hotel in Ballsbridge, Dublin.