Trump aims to show his softer side at Cleveland convention 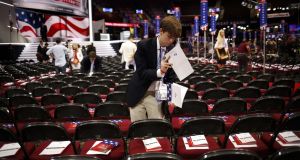 A volunteer places programmes on chairs before the start of the Republican National Convention in Cleveland, Ohio, US. Photograph: John Taggart/Bloomberg

Donald Trump, the man and the uniter: that’s how the billionaire’s campaign team and the Republican apparatchiks plan to present the brash businessman in Cleveland, Ohio, this week.

Aimed at softening the hard-man image that has alienated so many within his party, the organisers of the Republican national convention, which began on Monday, are trying to reach across the yawning chasm created by Trump’s shock takeover of the party.

They need to win over the 16 million voters who did not back the New Yorker in the party’s brutal primary.

Trump’s campaign chairman Paul Manafort, a veteran of the Republican party’s last contentious convention in 1976, said that the message at this year’s event will be about “who Donald Trump really is, because the campaign only shows a piece of his personality”.

“It is going to be a much more personal convention because he is an outsider,” Mr Manafort told The Irish Times in the lobby of a five-star hotel in downtown Cleveland.

“He hasn’t been involved in politics before so people don’t really know him other than what they’ve seen on the campaign trail. This week we are going to show the other side of him. That will help bring the party together.”

Each night of the convention is featuring testimonials from Trump’s immediate family, starting on Monday night with his would-be first lady, Melania, his third wife.

Despite the warm and fuzzy personal touch planned for the four-day convention, most Republicans identify Hillary Clinton, Trump’s opponent in the November 8th presidential election, rather than the businessman himself as the splint that will heal a fractured party.

“He’s the only one that can beat Hillary,” said Cheryl McDonald from California.

She and her friend, Liz Ritchie, both wearing Trump cowboy hats, are alternate delegates for Trump.

At a hotel in Akron, about 40 minutes from Cleveland, New Jersey governor Chris Christie told a meeting of Michigan Republican delegates that the party had a tremendous opportunity to beat Clinton, “but only if we are united”.

“If you’re not working for Donald Trump, you’re working for Hillary Clinton,” he said, urging Michigan Republicans to spread the message of unity.

Mr Christie is an effective messenger for the businessman. He competed against Trump in the primary, lost and quickly backed the property mogul, spotting his likely victory in the contest, as well as a possible cabinet post if Trump wins in November.

“Now, let me be clear, Donald Trump was not my first choice for president - I was,” said the second-term governor, to laughs.

Applying pressure to the unification efforts, Christie pointed to the pledge the Republican national committee forced the 17 primary candidates to sign a year ago.

They swore loyalty to the ultimate Republican victor at a time when Trump was threatening a third-party run.

Of the Republican candidates who lost out to the reality TV star, just six are speaking at the convention.

The six include Texas senator Ted Cruz, who came second in the Republican primary race with the backing of seven million voters, a crucial base of conservatives that Mr Trump needs to shore up.

Trump’s appointment of Indiana governor Mike Pence, a conservative, as his running mate will help in this regard.

Ken Cope, a retired US army colonel from Texas and a convention delegate bound to support Mr Cruz, justified his flip to Mr Trump in colourful terms.

“In Texas we have a thing called coyotes, and when a coyote gets its leg caught in a trap, what will it do for its own survival? It will gnaw that leg off.

“I am going to gnaw that [Cruz] arm off and I am going to vote for Donald Trump - and I will be proud to do it,” he said.

In Akron, Ronna Romney McDaniel, niece of 2012 nominee Mitt Romney, is in an tough position.

Her uncle, a staunch Never Trumper, is skipping the convention, while she is backing Trump in her role as chairman of the Michigan Republican Party, a Democratic state the billionaire is aggressively targetting.

She is trying to win over “Uncle Mitt”.

“I talk to him regularly. I am still working on it. I said, ‘I’ll give you a hug. Let’s work this out.’ But my family in Michigan, my mom, my aunts - we’re all supporting Trump,” she said.

Despite the Trump campaign’s hopes to unify the party, Mr Manafort did little to reach out the hand of friendship to the anti-Trump forces on day one.

He called the Bush family, who are avoiding Cleveland, “part of the past”.

“We’re dealing with the future,” he said.

The decision of John Kasich, another primary loser to Trump and the convention’s home-state governor, to miss the convention was “petulant”, “embarrassing” and “a wrong decision”, he said.

Mr Manafort claimed the Republican voters who backed Trump were moving ahead without the naysayers.

“They do not reflect the broad strokes of the Republican party,” he said, calling this week’s supposed peace-building summit in Cleveland “Trump’s convention”.