Ringo Starr, actor Hugh Laurie and Lenny Kravitz remember ‘one of the best blues guitarists ever’ 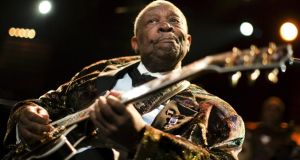 Tributes have begun flooding in for blues legend BB King, who has died at the age of 89.

His lawyer Brent Bryson said that King, who suffered from diabetes, died peacefully in his sleep at his home in Las Vegas on May 14th, where he had been receiving hospice care.

King’s style of singing and guitar playing was an inspiration to scores of musicians, and he mentored stars including Eric Clapton as well as collaborating with U2 on the 1989 track When Love Comes To Town.

Rapper Snoop Dogg posted a photo of King holding his trademark Gibson guitar, which he always named Lucille, on his Instagram page.

Bon Jovi guitarist Richie Sambora wrote: “My friend and legend BB King passed. I’m so so sad. He was so great to me. We’ve lost the King. My love and prayers to his family.”

Lenny Kravitz tweeted: “BB, anyone could play a thousand notes and never say what you said in one. RIP BB King,” while Bryan Adams added similar sentiments: “RIP BB King, one of the best blues guitarists ever, maybe the best. He could do more on one note than anyone.”

The Walking Dead’s David Morrissey added: “Sad news, goodbye to the great BB King,” with a YouTube clip of one of his performances, and former Pop Idol winner Will Young wrote: “BB King — the most wonderful blues singer and guitarist. I suggest everyone gets one of his records to hear true soul and spirit.”