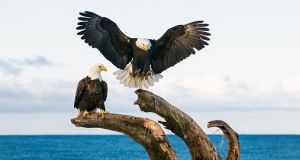 The bald eagle was removed from the federal endangered species list in America in 2007 after the banning of the pesticide DDT and habitat protection led to its recovery.

Authorities in the US are investigating the deaths of 13 bald eagles discovered on a Maryland farm.

Catherine Hibbard, a spokeswoman for the US Fish and Wildlife Service, which is investigating the deaths, said the cause of death was unknown pending a medical examination.

The bald eagle, which almost disappeared from the United States decades ago, was removed from the federal endangered species list in August 2007 after the banning of the pesticide DDT and habitat protection led to its recovery, according to the US Fish and Wildlife Service.

The bald eagle is a symbol of the federal government and is featured in the presidential seal and on US currency. The bird is federally protected.