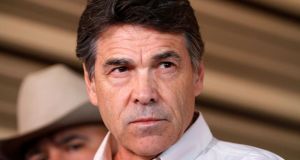 Texas governor Rick Perry who has been indicted by a grand jury in Texas on two counts of abuse of power and coercion over a funding veto he made last year. Photograph: Reuters

Texas Governor Rick Perry was indicted last night by a grand jury in Texas on two counts of abuse of power and coercion over a funding veto he made last year that was seen as being intended to force a local prosecutor to resign.

Mr Perry, a possible Republican candidate in the 2016 presidential race, was indicted by a grand jury in Travis County with abuse of official capacity, a first-degree felony, and coercion of a public official, a third-degree felony.

A probe was launched last year after Mr Perry vetoed $7.5 million in funding for an integrity unit that is part of the Travis County district attorney’s office. The move was seen as hardball politics to force out county district attorney Rosemary Lehmberg, a Democrat, after she pleaded guilty to drunken driving.

Mr Perry’s General Counsel, Mary Anne Wiley, said the veto was made in accordance with veto authority afforded under the Texas Constitution.

“We will continue to aggressively defend the governor’s lawful and constitutional action, and believe we will ultimately prevail,” she said.

Special prosecutor Michael McCrum said a conviction on the first-degree felony charge could bring between 5 to 99 years in prison.

Mr Perry will be arraigned next week, he added.

“The grand jury has spoken that there is probable cause to believe that he committed at least two felony crimes,” Mr McCrum told reporters.

Republicans have long charged that they have been targeted by the Public Integrity Unit, which is in the solidly Democratic Travis County, where left-leaning Austin is the main city.

The unit has investigated prominent Republicans including former US House of Representatives majority leader Tom Delay.

Mr Perry in recent months has been traveling to Republican battleground states and party gatherings in what analysts said were visits that have helped him scout the political landscape for a possible presidential run.

Mr Perry, the longest-serving governor in the state’s history, was forced to exit the 2012 Republican presidential race after several gaffes including when he lost his train of thought during a debate and could not recall which government departments he wanted to abolish.

He is not seeking re-election as governor and will step down next year.