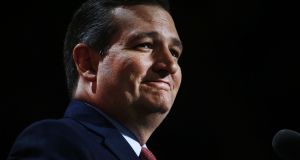 Texas senator Ted Cruz during his speech at the Republican National Convention in Cleveland, Ohio. He said that Mr Trump’s campaign and the Brexit vote showed that “people are fed up with politicians who don’t listen to them, fed up with a corrupt system that benefits the elites instead of working men and women”. Photograph: Andrew Harrer/Bloomberg

The British vote to leave the European Union was a sign of a powerful populist force against the political establishment, Texas senator Ted Cruz told the Republican National Convention.

Mr Cruz voiced neither support for nor opposition to Brexit during his prime-time address last night but pointed to the UK vote as an example of the ground-up insurgency for populism against political elites and likened the decision to the rise of Donald Trump in the US.

“Something powerful is happening. We’ve seen it in both parties,” he said, referring to the Republican Party and the Democratic Party that shifted to the left with the populism of Vermont democratic socialist Bernie Sanders, who ran a hard-fought primary against Hillary Clinton.

In his speech on the third night of the four-day convention, he said that Mr Trump’s campaign and the Brexit vote showed that “people are fed up with politicians who don’t listen to them, fed up with a corrupt system that benefits the elites instead of working men and women”.

During the US presidential campaign, Mr Trump said that the UK would be better off outside the European Union and on a visit to one of his golf courses in Scotland on the day the Brexit result was announced last month, he hailed the vote as “a great thing”.

Nigel Farage, the MEP and former Ukip leader who campaigned for the UK to leave the EU, was invited to attend the Republican convention in Cleveland this week. Mr Farage, like Mr Trump, has cast himself as an outsider leading a popular revolt against the establishment.

Speaking at the Ohio convention, Mr Farage declined to recommend how Americans should vote in the November 8th election, but said he would never vote for Mrs Clinton. He admitted that Mr Trump’s political style and rhetoric made “even me wince a little bit”.

Mr Farage said that it was “a big mistake for foreign politicians to tell people how to vote”, referring to President Barack Obama’s public intervention into the Brexit debate when he urged UK voters to vote to stay in the EU. Mr Obama said that Britain would be “at the back of the queue” in negotiating a trade deal with the US if it voted to leave the EU.