Tea Party spirit still stirs but not in Republicans 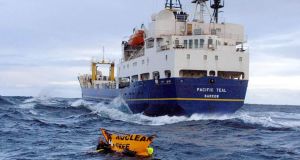 Greenpeace activists hold up a banner reading “Nuclear Free Pacific” as one of two ships carrying a cargo of weapons-grade nuclear waste passes through international waters off Australia in 2002. Photograph: Greenpeace/Sandy Scheltema

Two hundred and 40 years ago today citizens in the city of Boston, wearing Mohawk Indian costumes to disguise their identity, boarded a ship docked in the harbour and threw its cargo into the bay. They destroyed private property and brewed the largest cup of tea in history to draw attention to an unjust law. They succeeded.

Today, a conservative faction in the Republican Party has appropriated the name. But those Republicans may not be the true, or only, descendants of the Boston Tea Party.

In 1773, the property at issue belonged to the East India Tea Company, a corporation that held a British monopoly. The Tea Act, passed by the government of Lord North for the benefit of the company, was intended to undercut tea smugglers, unload surplus product on colonial customers and enhance corporate profits.

In addition, Lord North wanted to challenge quarrelsome colonials, who had protested taxes imposed by parliament, with the collection of a modest tax on tea. The revenue was supposed to pay the governor of Massachusetts and other officials, keeping them under London’s control.

The tax was not a burden. In fact, the Tea Act of 1773 reduced the price of tea in the colonies as part of the effort to undercut smugglers. But principles were involved. There was the matter of being at the mercy of a monopoly corporation, something particularly important to colonial merchants who made an honest living in the dishonest business of smuggling. Then there was being taxed by a distant and unrepresentative legislative body.

Popular opposition
All across the colonies there were protests against the tax. Shiploads of tea bound for other harbours were turned back when the local merchants felt the pressure of popular opposition and withdrew their purchase agreements for the tea. In Boston, the governor refused to send the shipment back to England and kept it at the dock until the deadline for payment of the tax arrived. Then the boys in Boston took matters into their own hands.

What happened in 1773 was a classic act of civil disobedience. It provided a model for Martin Luther King jnr and the civil rights movement. Ghandi invoked it in his struggles against British rule.

If you want to find the contemporary equivalent of the Boston Tea Party, forget Michele Bachmann, think Greenpeace. People who get arrested on an oil platform or in front of a whaling ship fighting corporate power and policy are doing what 18th-century Bostonians did. The Occupy Wall Street movement also resembles the original Tea Party. Protesters who took up illegal residence in New York parks were trying to draw attention to unequal political power and the suffering of recession victims who did not get a banker’s bailout.

Of course, you can violate laws for conservative causes too. But the current Tea Party is content to contest elections and manipulate congressional rules without actually violating laws or accepting the consequences. Moreover, they don’t have the same commitment to democracy as their forebears.

Suppressing voters
Today’s Tea Party opposes the will of the majority expressed in national elections and vilifies the president who won those elections. They mostly win office in gerrymandered districts and threaten mainstream Republicans with primary election challenges. Worst of all, they favour laws aimed at suppressing voter participation. They may like their liberty, but they are no friends of democracy.

Since 1773 many groups have claimed the legacy of the Boston Tea Party. The events in Boston have a broad appeal. Imagine what it must have meant to stand up to the most powerful empire in the world and risk near-certain retribution for a principled position.

In Ireland that act of imagination is not difficult. All across the world, the courage of revolutionary Bostonians can easily be admired.

Robert A Strong is the William Lyne Wilson professor of politics at Washington and Lee University in Lexington, Virginia. This year he serves as a Fulbright visiting scholar in the department of history and archives at UCD