The ‘most dangerous political operative in America’ is, like his boss, a freewheeling populist 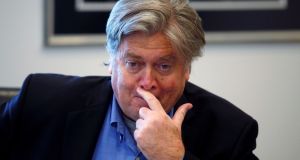 Donald Trump’s new campaign chief Steve Bannon during a roundtable discussion on security at Trump Tower in Manhattan on Wednesday. Under Bannon, the Breitbart news site has espoused the anti-establishment stance that propelled Trump to victory in the Republican primary race. Photograph: Carlo Allegri/Reuters

In turning to Steve Bannon to right his campaign, Donald Trump is embracing a man who former employees and associates describe as a more intense version of the Republican candidate himself.

In announcing the move, Trump quoted a headline describing his new hire – the executive chairman of Breitbart News – as the “most dangerous political operative in America”. Bannon is a former naval officer and Goldman Sachs banker who has also had stints in Hollywood. He jumped into politics in a similar way to his new boss after establishing himself in right-wing media as a freewheeling populist who filled a void for conservatives searching for an alternative to Fox News, the traditional bastion for Republican politicians.

The Virginia native, who was appointed chief executive of the Trump campaign 82 days before the election as the candidate slumps in the polls, has no experience running a political campaign. This should “sound alarm bells”, said Larry O’Connor, a former Breitbart employee who worked with Bannon several years ago.

But in other ways the move is unsurprising. Under Bannon, Breitbart has long espoused the anti-establishment stance that propelled Trump to victory in the Republican primary race. The news site has also taken a tough line on illegal immigration, which has been one of Trump’s signature issues.

At Breitbart, Bannon has steered hard-hitting coverage of Hillary Clinton, most prominently through the documentary Clinton Cash, which drew coverage at mainstream media including the New York Times. “If you look at Stephen Bannon and what they’ve built at Breitbart, it’s win at all costs,” Corey Lewandowski, the former Trump campaign manager who was fired two months ago in a previous reshuffle, told CNN on Wednesday.

Bannon met Andrew Breitbart in Los Angeles when he was starting his Breitbart website. Together the two crafted what Bannon described as a “global, centre-right, populist, anti-establishment news site”. Breitbart had helped Arianna Huffington start the Huffington Post, and Breitbart would emerge as the rightwing answer for digital media, thrusting the two men into leading roles as conservative agenda-setters.

Ken Doctor of Newsonomics said that Breitbart, along with sites like the Drudge Report and The Blaze, had emerged as part of a “reordering” at the top of US conservative media. Breitbart, viewed as a descendent of the Drudge Report, draws an estimated 12m unique monthly visitors.

However, while Fox News, under the helm of the recently ousted Roger Ailes, has clashed with Trump, Breitbart under Bannon has been more deferential to the businessman, raising questions about his own leadership of the news site.

“If you put all your chips on Donald Trump, and then assuming the polls hold and he loses, then what is Breitbart after the election?” said Doctor.

However, Breitbart published a story questioning Fields’s claims, sparking fury from Fields and other employees who felt he sided with Trump over his own employee. Breitbart’s editor Ben Shapiro resigned in light of the incident, arguing that Mr Bannon “put a stake through the heart of [Andrew Breitbart’s] legacy”.

“Steve Bannon is a bully, and has sold out Andrew’s mission in order to back another bully, Donald Trump,” said Shapiro. “I believe Breitbart became Trump Pravda so that Steve Bannon could be the conductor on the Trump Train.”

Fields said on Twitter on Wednesday: “Now that we know Bannon is running the show, I think we can understand why Ivanka and Jared checked out and are on vacation during campaign.”

Glenn Beck, the former Fox News host who was a strong supporter of Texas senator Ted Cruz in the Republican primary, slammed Bannon in February, likening him to Hitler’s propagandist Joseph Goebbels.

“By taking orders from a political candidate and reworking your entire site to promote the lies of [Trump] . . . That doesn’t make you Roger Ailes. That makes you Goebbels,” said Mr Beck.