State of emergency declared in Ferguson after violence 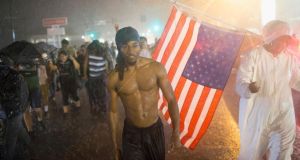 Authorities declared a state of emergency in Ferguson, Missouri, after gunfire erupted on the anniversary of a high-profile police shooting and prosecutors charged an 18-year-old man with assault on officers.

The man, Tyrone Harris, was critically wounded in an exchange of gunfire with police on Sunday night as people marked the shooting death one year ago of unarmed black man Michael Brown (18) by a white officer in Ferguson, a suburb of St Louis.

Police said Mr Harris was being treated in hospital. They said St Louis County prosecutors charged Mr Harris, whose bond was set at $250,000 (€227,000), on four counts, including “assault on law enforcement” and shooting at a motor vehicle.

Guns are drawn in the Ferguson market pic.twitter.com/eSDDBXkmLN

Guns were in evidence nearby.

(1/2) A St. Louis County officer was involved in an officer-involved shooting after comin g under heavy gunfire. pic.twitter.com/L4PqopaEF1

The local police department confirmed an officer was involved in the shooting.

(2/2) During the gunfire, at least 2 unmarked cars took shots. We will release more details when available. pic.twitter.com/luPnp6iXqZ

“In light of last night’s violence and unrest in the City of Ferguson, and the potential for harm to persons and property, I am exercising my authority as county executive to issue a state of emergency, effective immediately,” county executive Steve Stenger said in a statement.

On a day of civil disobedience called by activists in Missouri on Monday, several people were arrested after jumping barricades at a courthouse in St Louis.

Members of the clergy and civil rights groups led the rally of more than 100 people through city streets, shouting, “This is what democracy looks like” and “Black lives matter”.

On Sunday night in Ferguson, volleys of gunshots rang out as police in riot gear tried to disperse demonstrators blocking traffic and smashing storefront windows along a street that was a flashpoint of riots last year after Brown was shot dead.– (Reuters)