Snowden says ‘no chance’ of fair trial in US 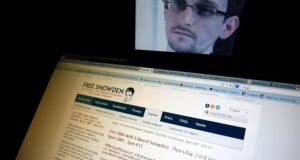 A portrait of former US spy agency contractor Edward Snowden is displayed behind a screen as he answers users’ questions on Twitter. Photograph: Dado Ruvic/Reuters

Former US spy agency contractor Edward Snowden has urged the United States to strengthen its protections for whistleblowers and said he cannot return home from Russia because “there’s no chance to have a fair trial”.

During an online question-and-answer session, Mr Snowden also denied that he stole the passwords of National Security Agency co-workers, condemned threats to his life made by unnamed US intelligence officials in the news media and decried “indiscriminate mass surveillance” by governments.

Mr Snowden, living in temporary asylum in Russia after stealing and disclosing US government secrets on surveillance programs and other activities, faces criminal charges in the United States after fleeing last year first to Hong Kong and then Russia, where he was granted at least a year’s asylum.

His comments, made on a “Free Snowden” website, came as Attorney General Eric Holder said the US would not consider clemency but hinted at the possibility of a plea-bargain.

“If Mr Snowden wanted to come back to the United States, enter a plea, we would engage with his lawyers. We’d do that with any defendant who wanted to enter a plea of guilty,” Mr Holder said.

In his online session, Snowden was asked to explain the conditions he needed to return to the United States.

“Returning to the US, I think, is the best resolution for the government, the public, and myself, but it’s unfortunately not possible in the face of current whistleblower protection laws, which through a failure in law did not cover national security contractors like myself,” Mr Snowden wrote.

He said the law under which he was charged “was never intended to be used against people working in the public interest and forbids a public interest defense.” He added that “there’s no chance to have a fair trial, and no way I can come home and make my case to a jury.”

He also disputed a Reuters report in November that quoted unnamed sources as saying he used login credentials and passwords provided unwittingly by colleagues at a spy base in Hawaii to access some of the classified material he leaked to the media.

Mr Snowden called that report “simply wrong,” adding, “I never stole any passwords, nor did I trick an army of co-workers.”

Barb Burg, the global head of communications for Reuters, said in a statement, “We stand by our story and did not, in any event, accuse Mr Snowden of stealing.”

His Russian lawyer said on Tuesday that Mr Snowden needs better security after a news report quoted unnamed US intelligence officials saying they wanted him dead and discussed ways to kill him.

Mr Snowden said he was concerned about this “direct threat to my life” but vowed “I’m not going to be intimidated.”

Mr Snowden decried what he saw as a lack of protection for Americans who come forward with evidence of official wrongdoing and called on the United States to put in place greater protection for whistleblowers.

He said current US whistleblower protections are so “weak” and ineffective that they appear to be “intended to discourage reporting of even the clearest wrongdoing.”

The documents that Snowden stole and released to the news media exposed the reach of US surveillance activities, including the bulk collection of telephone records of millions of Americans, as part of counterterrorism efforts.

Mr Holder, asked yesterday for his reaction to the notion of Snowden as a whistleblower, said he has “harmed the national security of the United States in ways that I know I can quantify, I can demonstrate, were I allowed to share with you some of the things that I see in my daily intelligence brief.”