Some states propose bringing back firing squads or the electric chair 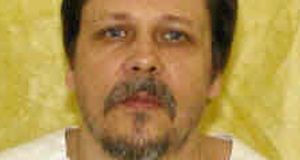 Dennis McGuire, a murderer and rapist, was executed with an untested combination of drugs by the state of Ohio on January 16th. Photograph: Ohio department of rehabilitation and corrections via the New York Times

America Letter: Ohio’s execution of convicted murderer Dennis McGuire earlier this month with a new two-drug experimental concoction has stirred up debate again in the US about the death penalty.

McGuire was executed at Southern Ohio Correctional Facility on January 16th for the 1989 rape and murder of 22-year-old pregnant woman Joy Stewart, a crime he confessed to.

Using an untested combination of midazolam and hydromorphone, the prison authorities took 26 minutes, according to eye-witness accounts of the execution, to kill McGuire. He was heard gasping and snorting for air in the public observation room for about 11 minutes after the lethal injection was administered. It was one of the longest executions since Ohio reinstated capital punishment in 1999. “Towards the end, the gasping faded into small puffs of his mouth,” said Fr Lawrence Hummer, a Catholic priest who watched the execution, in an article he wrote for the Guardian. “It was much like a fish lying along the shore puffing for that one gasp of air that would allow it to breathe.

The execution shocked McGuire’s watching family. “I don’t feel anybody deserves that – families, or my dad, anybody on death row – nobody deserves to go through that,” said McGuire’s son, also Dennis, who watched his father die with his sister, Amber. The family are suing the state for a death they say amounted to cruel punishment and torture.

In the aftermath of the execution, several state legislators in Ohio have, with the American Civil Liberties Union, urged the state’s governor John Kasich to suspend executions. “This is not about Dennis McGuire, his terrible crimes, or the crimes of others who await execution on death row,” the ACLU wrote to Kasich.

“It is about our duty as a society that sits in judgment of those who are convicted of crimes to treat them humanely and ensure their punishment does not violate the constitution.”

A shortage of lethal drugs has forced the 32 American states that still kill prisoners to play around with different types of experimental drugs, similar to the cocktail that eventually killed McGuire, and even to consider older methods of state killing.

Since 2010 states have struggled to source the traditionally used lethal drugs, specifically sodium thiopental and later pentobarbital, because their European manufacturers have objected to their use.

Missouri even considered using propofol, the surgical anaesthetic that became infamous for its role in Michael Jackson’s death by overdose.

To cope with the drug shortage, state legislators in Virginia, Missouri and Wyoming have proposed bringing back the electric chair or firing squads. Wyoming state senator Bruce Burns presented his own Bill to introduce executions by firing squad. So too did Rick Brattin, a Republican state representative in Missouri.

“It’s more inhumane to have someone strapped to a chair, watching a doctor poke them with a needle 10 times and then watch the drug flow down an IV to put them to sleep like a dog,” said Brattin.

“I’m sorry I find that more inhumane versus a blindfold and your sentence being carried out by a firing squad.”

Brattin’s Bill proposes that five law enforcement officers would carry out the shooting.

Firing-squad executions are not unusual in the US. There have been three in Utah since 1976 and only for inmates sentenced before 2004, though the state is phasing out this method.

Doug Berman, a law professor at Ohio State University and a death penalty expert, said that there is no law blocking the use of firing squads but he doesn’t expect the Supreme Court, which technically has never declared any method of execution unconstitutional, to permit a state to return to kill by firing squad or the electric chair if it is possible to refine the lethal injection method.

“Every state is going to work hard to find a better lethal injection approach before they embrace one of the older methods,” he said. “Lethal injection has found a place as the most civilised way to do executions.”

Proposals to bring back older methods are “desperate political statements”, he said, aimed at limiting scrutiny of the new drugs with threats to turn to the older, more drastic alternatives.

The number of states still enforcing capital punishment continues to fall alongside the number of death sentences imposed and executions carried out. Six states have repealed the death penalty in as many years, Maryland being the last in 2013. Dieter expects New Hampshire, Delaware and Nebraska to follow suit, though it will be a slow process.

In the meantime, with the continuing shortage of drugs, experimentation may mean death comes slowly to more inmates in states where the killing continues.