U.S. President Barack Obama in an interview with Univision acknowledges a Senate report on "enhanced interrogation" and says anybody who engaged in such act would “be breaking the law.” Video: Reuters 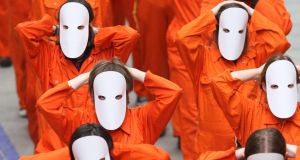 The Rendition Project and Reprieve have identified 27 aircraft used by the CIA in its rendition programme which they claim landed more than 200 times at Irish airports on global circuits that ferried al-Qaeda suspects around secret prisons or “black sites” between 2001 and 2006. File photograph: PA Wire

The invoice states that the trip lasted four days in November 2012 and flew from Washington to Kabul in Afghanistan and back again stopping for fuel at Shannon, Dubai and, on the return leg, London.

Under the section listing “passengers,” the word “blocked” is typed by the aircraft leasing company Richmor Aviation, which has an address at Hudson, about two hours north of New York City. The tail number of the plane is N85VM, a Gulfstream jet, and the trip cost $198,930.30, according to the invoice dated November 15th, 2002.

The aircraft “almost certainly picked up” Abd al-Rahim al-Nashiri, a Saudi citizen, according to The Rendition Project, the research project compiled by two UK-based academics that tracked the CIA’s “rendition” and torture of al-Qaeda suspects around the globe, and Reprieve, the human rights group and legal charity.

The US government alleges that al-Nashiri was the mastermind behind the bombing of the USS Cole that killed 17 American sailors in Yemen in 2000. He was held at secret CIA prisons or “black sites” in Afghanistan, Thailand, Poland, Morocco and Romania, before being moved to the controversial detention centre at Guantanamo Bay, Cuba.

The Rendition Project and Reprieve have identified 27 aircraft used by the CIA in its rendition programme which they claim landed more than 200 times at Irish airports on global circuits that ferried al-Qaeda suspects around secret prisons or “black sites” between 2001 and 2006.

Some of these circuits included so-called “tech stops” at Shannon and involved stopovers at destinations known to be central to the CIA’s so-called rendition, detention and torture programme.

The use of Shannon or other Irish airports is not mentioned, at least not referred to by name, in the 525-report on the CIA torture and rendition programme released by a Senate intelligence committee.

On 11 occasions between July 2002 and October 2004, “available evidence points strongly towards Irish airports being used by the aircraft on the way to, or on the way back from, known rendition of detainees in the ‘war on terror,’” The Rendition Project and Reprieve say. The groups found that there were another 16 trips or “circuits” between September 2002 and August 2006 involving stopovers at Irish airports that involved earlier or later connections between two or more secret prisons, suggesting that these are more “rendition” operations.

Among the prisoners - or high-value detainees, as the US identifies them - who travelled on aircraft that had stopped in Shannon on the way to or from picking them up and “rendering” them elsewhere - were Hassan bin Attash, a Yemeni/Saudi national, and Ramzi bin al-Shibh, a Yemeni according to The Rendition Project/Reprieve. The two men have been at Guantanamo for 10 years and 8 years respectively.

The US claims Bin al-Shibh helped the 9-11 hijackers, while Bin Attash is the brother of Waleed Mohammed bin Attash, who has been charged with helping to train the hijackers.

The men were transported from Afghanistan to Jordan and then Morocco on another Gulfstream jet with the tail number N379P. After stopping at Morocco the plane flew to Shannon. Both men claim that they were tortured at “black sites” before being moved to Guantanamo.

“We don’t know of a flight that had a detainee on board when it went through Shannon,” said Steve Kostas, an investigator who worked with Reprieve gathering information on the rendition programme. “But I don’t think that absolves Ireland by any stretch.”

Dr Sam Raphael, a senior lecturer in international relations at Kingston University in London, said he found it hard to see the moral justification of the Irish Government allowing the CIA use Shannon and other Irish airports on the rendition circuits - it’s kind of like “helping a bank robber on the way to a bank robbery,” he said.

“Even though there weren’t detainees on board, these were fundamentally important logistical stops. Without the use of Irish territory they couldn’t have taken place in the way they did,” said Dr Raphael who built The Rendition Project database in a collaborative research project with Dr Ruth Blakeley at the University of Kent.

Mr Kostas said he interviewed pilots who told him that the oversight at Shannon for what was known as government planes or aircraft on “a government mission” was “extremely lax.”

“No one would check the manifest or look on-board the plane,” he said.

The Irish Department of Transport said that it had no role in checking aircraft or flight manifests, which is a requirement of the Garda or Revenue Commissioners.

The Department of Justice said that the Garda has “full authority to search civil aircraft where they have reasonable grounds for suspecting illegal activity such as extraordinary rendition” and that gardai had investigated complaints from members of the public about aircraft passing through Shannon but had found no evidence of rendition.

The Government has consistently stated that it is “completely opposed to the practice of extraordinary rendition,” a department spokesman said. While there is no evidence that detainees were transported through Irish airports, the department acknowledged that aircraft that may have previously or subsequently been involved in renditions might have passed through Shannon Airport, he said.

“However, there is no evidence to suggest that any of these aircraft were carrying prisoners at any time when they transited through Irish airports.”

Last night a spokeswoman for the Department of Foreign Affairs said the US government had made assurances to the Irish Government “at the highest level” that no prisoners have been transported “for rendition purposes” through Irish territory.