US unable to contact country’s leaders since their arrests on Monday, says official

Professor Melissa Crouch, an Australian expert on Myanmar politics, says that there is a lot of "confusion" and "devastation' in the country, following the military seizing power in a coup against the democratically elected government. Video: Reuters 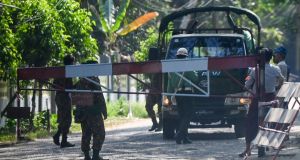 Soldiers stand guard at the checkpoint of a military compound in Yangon on February 1st , as Myanmar’s military detained the country’s de facto leader Aung San Suu Kyi and the country’s president in a coup. Photograph: STR/AFP via Getty Images

The United States formally declared the military takeover in Myanmar as a coup d’etat on Tuesday, paving the way for a review of foreign assistance to the country and a consideration of new sanctions on the country’s generals.

A state department official said the US has had no contact with Aung San Suu Kyi or other civilian leaders since they were arrested by the military on Monday. “We’ve not been able to reach them. We’re continuing to try and do that,” the official said. Similarly, no direct contact has been made by the US mission in Burma with the military, though the US is having daily discussions with other partners, including India and Japan, on the issue.

Ms Suu Kyi and her detained party colleagues have not been seen since they were arrested in a pre-dawn swoop earlier this week.

In New York, the United Nations Security Council met for an emergency closed-door setting, where members were briefed by UN special envoy Christine Schraner Burgener. The Swiss diplomat said she had been in contact with the military leadership as recently as the day before the takeover, and described the turn of events as “surprising and shocking”, according to UN spokesman Stéphane Dujarric. Concern for the plight of the Rohingya Muslims was also expressed.

The coup in Myanmar presents the first unexpected foreign policy crisis for the security council since Ireland joined the 15-member body for a two-year term on January 1st.

Ireland was among the countries pushing for a collective statement to be agreed by the council. As expected, no final communique was issued after yesterday’s meeting, despite the United Kingdom – which assumed the rotating presidency this week – drafting a strongly-worded statement in advance.

China’s presence on the security council has complicated the body’s efforts to present a united front as Myanmar looks set to return to military rule. Negotiations are continuing behind the scenes and a statement is possible in the coming days. Human rights groups like Amnesty International have called on the Security Council to impose targeted sanctions.

The new military leadership continued to bed down its power base yesterday, instilling new appointees to key positions, including as governor of the central bank. Flights were also suspended until April.

Nonetheless, there were some signs of public protest at the event of recent days. Residents in Yangon, the largest city in the country, banged pots and honked car horns to voice their opposition to the coup. Win Htein, the chairman of Ms Suu Kyi’s National League for Democracy party, spoke from a small office in the capital city of Naypyitaw, urging people to show their opposition.

“All the voters who gave their backing to us in the 2020 general election should follow Aung San Suu Kyi’s instructions to carry out civil disobedience,” he said, referring to a Facebook post attributed to Ms Suu Kyi on Monday in which she urged people not to accept the coup and to publicly protest.

This week’s events were triggered by the planned meeting of Myanmar’s new parliament on Monday. The army, which subsequently installed former General Myint Swe as acting president, argued that the results of November’s election were fraudulent. The army’s top commander Min Aung Hlaing, who has huge political influence and ambition in the country, seized legislative and executive power, and a state of emergency was declared for a year.

The coup has elicited international condemnation. EU foreign policy chief Josep Borrell said that Ms Suu Kyi, President Win Myint and others must be “immediately and unconditionally released”. “The European Union calls for the immediate restoration of the legitimate civilian government in Myanmar, and the swift opening of parliament with the participation of all elected representatives, as foreseen by the constitution,” he said.