San Francisco crash jet was far below its target speed 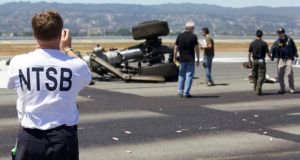 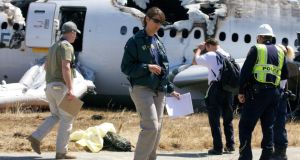 An NTSB investigator examines scattered debris on the scene of the Asiana Airlines crash in San Francisco, California. The Boeing 777 passenger aircraft from Asiana Airlines coming from Seoul, South Korea crashed landed on the runway at San Francisco International Airport. Two people died and dozens were injured in the crash. Photograph: NTSB/Getty Images 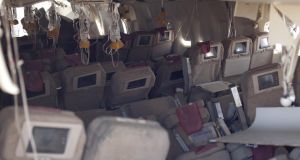 In this handout photo provided by the National Transportation Safety Board, oxygen masks hang from the ceiling in the cabin interior of Asiana Airlines flight 214 following Saturday’s crash. Photograph: NTSB/Getty Images 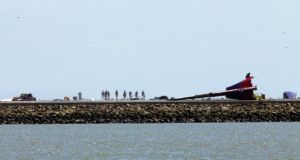 The Asiana Airlines aircraft that crashed on Saturday at San Francisco airport was travelling at 103 knots just seconds before it hit the seawall in the front of the runway, far below the target speed of 137 knots, according to a flight data recorder recovered by the National Transportation Safety Board (NTSB).

NTSB Chair Deborah Hersman told reporters today that three seconds before impact, the aircraft’s engine was at 50 per cent power, and engine power was increasing. At impact, the flight speed was 106 knots.

Earlier it was reported that the crew of the flight that crashed with the loss of two lives had tried to abort the landing seconds before hitting the ground.

The pilot of the crashed plane was still in training for the Boeing 777 when he attempted to land the aircraft under supervision, according to the South Korean airline.

Lee Kang-kuk was the second most junior pilot of four on board the Asiana Airlines aircraft and had 43 hours’ experience flying the long-range jet, according to the airline.

The plane’s crew tried to abort the descent less than two seconds before it hit a sea wall on the landing approach to the airport, bounced along the tarmac and burst into flames.

It was Mr Kang-kuk’s first attempt to land a 777 at San Francisco, although he had flown there 29 times previously on different types of aircraft, said South Korean transport ministry official Choi Seung-youn. Earlier, the ministry said he had accumulated a total of 9,793 flying hours, including his 43 at the controls of the 777.

Two teenage Chinese girls on their way to summer camp in the United States were killed and more than 180 injured in the crash, the first fatal accident involving the Boeing 777 since it entered service in 1995.

Flight 214 crashed after the crew tried to abort the landing with less than two seconds to go, according to the US National Transportation Safety Board yesterday.

Asiana said Lee Kang-kuk was in the pilot seat during the landing, although it was not clear whether the senior pilot, Lee Jung-min, who had clocked up 3,220 hours on a Boeing 777, had tried to take over to abort the landing.

“It’s a training that is common in the global aviation industry. All responsibilities lie with the instructor captain,” Yoon Young-doo, the president and CEO of the airline, told a news conference today at the company headquarters.

Information collected from the plane’s cockpit voice recorder and flight data recorder indicated that there were no signs of trouble until seven seconds before impact, when the crew tried to accelerate, NTSB chairwoman Deborah Hersman told reporters at San Francisco airport yesterday.

A stall warning, in which the cockpit controls begin to shake, activated four seconds before impact, and the crew tried to abort the landing and initiate what is known as a “go around” maneuver 1.5 seconds before crashing, Ms Hersman said.

“Air speed was significantly below the target air speed” of 137 knots, she said. The throttle was set at idle as the plane approached the airport and the engines appeared to respond normally when the crew tried to gain speed in the seconds before the crash, Ms Hersman added.

In a tragic new twist, the San Francisco Fire Department said that one of the Chinese teenagers may have been run over by an emergency vehicle as first responders scrambled to the scene.

“One of the deceased did have injuries consistent with those of having been run over by a vehicle,” fire department spokeswoman Mindy Talmadge said.

The two, Ye Mengyuan and Wang Linjia, were classmates and friends from the same middle school in Quzhou, in the prosperous eastern coastal province of Zhejiang, and had been going to the United States to attend summer camp.

Ms Ye (16), had an easy smile, was an active member of the student council and had a passion for biology, the Beijing News reported.

“Responsible, attentive, pretty, intelligent,” were the words written about her on a recent school report, it added.

Ms Wang, a year older than Ms Ye, was also known as a good student and was head of her class, the newspaper said.

The two girls were among a group of 30 students and five teachers from Jiangshan Middle School on their way to attend the summer camp, the official Xinhua news agency said.

More than 30 people remained hospitalised late last night. Eight were listed in critical condition, including two with paralysis from spinal injuries, according to hospital officials.

The charred hulk of the aircraft remained on the airport tarmac as flight operations gradually returned to normal. Three of the four runways were operating by Sunday afternoon.

Ms Hersman said it was too early to speculate on the cause of the crash. The data recorders corroborated witness accounts and an amateur video, shown by CNN, that indicated the plane came in too low, lifted its nose in an attempt to gain altitude, and then bounced violently along the tarmac after the rear of the aircraft clipped a seawall at the approach to the runway.

Asked whether the information reviewed by the NTSB showed pilot error in the crash, Ms Hersman did not answer directly.

“What I will tell you is that the NTSB conducts very thorough investigations. We will not reach a determination of probable cause in the first few days that we’re on an accident scene,” she told reporters.

Asiana said mechanical failure did not appear to be a factor. Ms Hersman confirmed that a part of the airport’s instrument-landing system was offline on Saturday as part of a scheduled runway construction project, but cautioned against drawing conclusions from that.

“You do not need instruments to get into the airport,” she said, noting that the weather was good at the time of the crash and the plane had been cleared for a visual approach.

The Asiana flight was flying to San Francisco from Seoul with 291 passengers and 16 crew members on board. Several large groups of Chinese students were among the passengers.

People on the flight said nothing seemed amiss until moments before the crash. Pictures taken by survivors showed passengers hurrying out of the wrecked plane, some on evacuation slides. Thick smoke billowed from the fuselage and TV footage showed the aircraft gutted by fire. Much of its roof was gone.

“You can see the devastation from the outside of the aircraft, the burn-through, the damage to the external fuselage,” she said. “But what you can’t see is the damage internally. That is really striking.”

The NTSB released photos showing the wrecked interior cabin with oxygen masks dangling from the ceiling.

“As chaotic as the site was yesterday, I think a number of miracles occurred to save many more lives,” Lee said at the airport news conference. Appearing later at San Francisco General Hospital, he declined to address whether one of the Chinese teenagers may have been run over.

It was the first fatal commercial airline accident in the United States since a regional plane operated by Colgan Air crashed in New York in 2009.

Asiana, South Korea’s junior carrier, has had two other fatal crashes in its 25-year history.