Republicans tussle on policy as Rubio shines in home state

In the most civilised Republican debate of the campaign so far Donald Trump stood by his 'Islam hates us' comments. Video: CNN 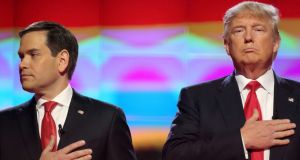 The four remaining Republican candidates avoided the personal insults that have dominated recent debates, arguing on policy at the party’s 12th debate that allowed struggling Florida senator Marco Rubio to excel in his home state.

Last night’s televised debate, hosted by news channel CNN, comes before do-or-die primaries in Florida and Ohio on Tuesday that will decide whether frontrunner Donald Trump’s surge to the nomination can be stopped and whether Mr Rubio and Ohio governor John Kasich can stay in the race.

Mr Trump appeared more presidential on the Miami debate stage, while Mr Rubio showed off his greater command of the policy issues, particularly on foreign policy and national security, as the two candidates set aside the vulgar slights and name-calling of the recent past.

“So far I cannot believe how civil it’s been up here,” said the billionaire at one point after tussling with his chief rival, Texas senator Ted Cruz.

Five big states, including Illinois, Missouri and North Carolina, vote on Tuesday with Mr Cruz, Mr Rubio and Mr Kasich hoping to halt Mr Trump’s march to the 1,237 delegates he needs to win the nomination.

Mr Trump’s delegate count stands at 458 and a lead of almost 100 over Mr Cruz with 359, Mr Rubio with 151 and Mr Kasich with 54. There are 367 delegates at stake in Tuesday’s multistate nominating contests, including the biggest test in Florida, which has 99 delegates up for grabs.

The New York billionaire confirmed during the debate that he picked up the key endorsement of Ben Carson, the retired neurosurgeon who dropped out of the race last week and is popular among conservatives.

Mr Rubio, with just two state victories to Mr Trump’s 15 and Mr Cruz’s seven, scored the biggest points of the night by arguing with the businessman on Barack Obama’s renewed diplomatic relations with Cuba, a contentious issue in Florida where many Cuban exiles live.

Mr Trump seemed to resile from his past support of Mr Obama’s historic rapprochement with Havana, warning that the US could be sued by Cuba for $400 billion of $1 trillion in reparations for years of abuse.

“All that stuff has to be agreed now. We don’t want to get sued after the deal is made,” he said, arguing for a good deal to be reached.

Mr Rubio, the son of Cuban immigrants and an outspoken critic of the president’s policy, played with the billionaire’s light grasp of the issue.

“I don’t know where Cuba is going to sue, but if they sue us in a court in Miami, they’re going to lose,” he said to laughter and applause.

Where the Floridian spoke in specifics about what would be “a good deal” with Cuba instead of getting “nothing in return” with Mr Obama, Mr Trump talked in sweeping generalities, repeated for effect.

Mr Rubio acknowledged that many people found appeal in Mr Trump saying things people wished they could say but this caused a problem.

“Presidents can’t just anything they want. It has consequences, here and around the world,” said the Florida senator, to applause.

He evoked the image of Islamic crescent moons over the graves of US soldiers buried in Arlington’s military cemetery near Washington to challenge the businessman’s crude generalisation of Muslims.

Mr Trump responded by recalling the attacks of September 11, 2001 and saying that there was “tremendous hate” towards the US.