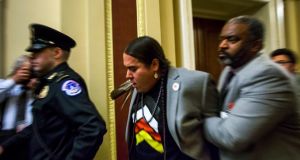 Capitol police lead away a protestor after he and three others were removed from the Senate Gallery for shouting during a vote on the XL Pipeline in the US Capitol in Washington DC. Photograph: EPA

Republican prospects of increasing their US Senate majority were boosted when a Bill approving the construction of the controversial Keystone XL pipeline was blocked by a single vote, further weakening the re-election bid of Democratic senator Mary Landrieu of Louisiana.

Ms Landrieu, who faces a run-off election with Republican congressman Bill Cassidy next month to decide the final Senate seat in the midterm elections, asked fellow Democrats to support a Keystone bill, for which both claimed credit, but fell short of the 60 votes required to stop her party’s filibuster.

Keystone is set to be one of the first battleground issues between the Democratic president and the new Republican-controlled Congress.

Republicans are pushing for the construction of the 2,700-kilometre pipeline that would transport 800,000 barrels of tar sands crude oil a day from Canada to oil refineries in Texas, claiming that it would create thousands of jobs.

He is also awaiting a review by the State Department which must assess the project because it crosses an international border.

Long-time Keystone pipeline supporter Ms Landrieu, the three-term senator from a major oil-dependent state, pressed for the Senate to approve the project last week in a bid to ensure her political survival.

Fourteen Democratic senators, many from energy-industry states, sided with all 45 Senate Republicans but, in a victory for environmentalists, the 59 votes were not enough for the Bill to proceed.

The pipeline will fare better in the 114th Congress in January when Republicans, fresh from their midterm election victories on November 4th, will have a majority of at least 53 seats in the Senate – and possibly 54 if Ms Landrieu fails to be re-elected in a December 6th run-off.

Some Republicans believe that they may even be able to attract enough support from Democrats to secure 67 votes for the project to overcome a veto by Mr Obama.

“If you do the math, we have 59 votes today,” said Republican John Hoeven of North Dakota. “But if you look at the new Congress, you can count four more right away [and] I think there may be others.”