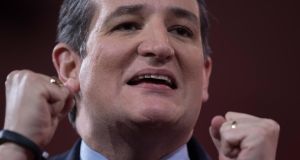 US Republican senator Ted Cruz: he pushed his party to force a government shutdown in 2013 in an unsuccessful bid to deny funding to the Affordable Care Act, drawing the disapproval of Republican leaders and praise from the grassroots Tea Party. Photograph: Nicholas Kamm/AFP/Getty Images

Texas senator Ted Cruz, who has frequently clashed with leaders of his Republican Party, will announce on Monday that he plans to run for president, an aide told Reuters on Sunday.

Mr Cruz will be the first major figure from either party to announce his candidacy for the 2016 election when he speaks at Liberty University, an evangelical Christian school in Virginia. Two other prominent Republican senators, Rand Paul of Kentucky and Marco Rubio of Florida, are expected to reveal their plans in coming weeks.

Mr Cruz (44) has built a reputation as an unyielding advocate for conservative principles in his two years in the Senate.

He pushed his party to force a government shutdown in 2013 in an unsuccessful effort to deny funding to President Barack Obama’s Affordable Care Act, drawing the disapproval of Republican leaders in Washington and praise from the grassroots Tea Party movement.

As a presidential candidate, Mr Cruz is likely to stake out a position on his party’s far right wing. In recent weeks, he has told audiences to look closely at the actions of Republican candidates who say they stick up for conservative principles. “We need to look to people who walk the walk and don’t just talk the talk,” he said at the Conservative Political Action Conference in February.

Mr Cruz is currently favoured by 8 per cent of self-identified Republicans in a Reuters/Ipsos tracking poll. Former Florida governor Jeb Bush leads the poll at 21 per cent, and Wisconsin governor Scott Walker ranks second at 16 per cent.

All of these potential candidates have spent the past several months meeting with donors and visiting states such as Iowa and New Hampshire that vote early in the primary season, but none have yet to formally announce their candidacy. – (Reuters)