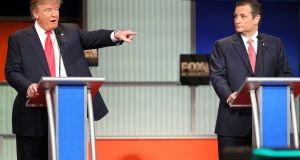 Republican Ted Cruz felt the pressure of challenging Donald Trump in Iowa, which kicks off the presidential race on February 1st, as he came under fire from his rival candidate at the party’s sixth debate.

In the fiercest clash of night, Mr Trump, who is leading Mr Cruz in national polls, questioned the Texas senator’s eligibility to be president due to his birth in Canada to an American mother.

Just 17 days before the first voters start to pick the presidential nominees, the gloves came off in the scrap between the seven highest-polling Republican candidates in a debate hosted by Fox’s business channel.

The first debate of 2016 was held in South Carolina, the third state to pick the presidential nominees next month and the one that often determines the final two names on the November presidential ballot.

National security, the economy and foreign policy were the main topics of discussion but the night will be remembered for the jabs thrown as the candidates jockeyed for profile and higher poll numbers.

Mr Trump goaded his rival, raising doubts about whether the Texan was not “a natural born citizen,” a constitutional prerequisite to becoming president, because of Canadian birthplace.

“Under longstanding US law, the child of a US citizen born abroad is a natural-born citizen,” said Mr Cruz before he shot back, claiming that under “birther” logic the businessman was relying on, Mr Trump “would be disqualified” too because of his Scottish mother.

“On the issue of citizenship, Donald, I’m not going to use your mother’s birth against you,” said Mr Cruz.

“Ok, good, because it wouldn’t work,” Mr Trump hurled back.

Once cordial in the campaign, the two leading Republicans have locked horns recently as Mr Cruz, a Tea Party favourite who is popular among Iowa’s conservatives and evangelicals, has soared in polls of Republican caucus-goers in the state to challenge Mr Trump’s lead.

The businessman was booed by the audience when he referred to a Wall Street Journal/NBC News poll released hours before the debate that showed him widening his lead over Mr Cruz at a national level.

Asked why he was raising the senator’s citizenship as an issue now, Mr Trump admitted it was because Mr Cruz has been polling better.

“Hey look, he never had a chance. Now he’s doing better. He’s got probably a 4 or 5 per cent chance,” he said, using his popularity as one of his favourite slapdowns of other candidates in debates.

The two candidates dominated the TV debate, speaking for about 17 minutes each during the rancorous two and a half hour broadcast.

Mr Cruz attempted to score a point against Mr Trump questioning his “New York values,” the senator’s code for criticising his conservative credentials, which will be weighed closely by Iowans.

“Everyone understands that the values in New York City are socially liberal or pro-abortion or pro-gay marriage, focus around money and the media,” said the senator, explaining what he meant.

Framing it another way, Mr Cruz said: “Not a lot of conservatives come out of Manhattan – I’m just saying.”

Mr Trump refuted his charges by poignantly recalling how the city responded to the 9/11 al-Qaeda attacks. His response drew applause from the crowd, forcing Mr Cruz to clap along awkwardly.

It was a night of defensive play for Mr Cruz, In the latter stages, he took several hits from another freshman senator, Marco Rubio of Florida, who is third in the polls, over their positions on immigration.

“That is not consistent conservativism; that is political calculation.”

Responding to one of the bigger political stories of the week, Mr Cruz described a report that he failed to properly disclose loans from Goldman Sachs as a “hit piece” by the New York Times.

He used the question about the loan to attack the Democratic presidential frontrunner: “Unlike Hillary Clinton, I don’t have masses of money in the bank, hundreds of millions of dollars.”

The senator admitted making “a paperwork error” by disclosing the loan in the Senate but not in a second filing to another federal agency.

On another matter of controversy, Mr Trump defended his proposal to block Muslims from entering the US, claiming that even some Muslim friends support it. Only Jeb Bush spoke out against the plan.

In a clash over how to deal with international trade with China, Mr Trump ripped into Mr Bush with another damaging putdown.

“We need someone with a steady hand being President of the United States, ” the businessman said.

“And we don’t need a weak person being President of the United States. That is what we would get if it were Jeb.”

The next Republican debate is on February 6th, three days before New Hampshire, the second nominating state, holds its primary, at which time the Iowa caucuses should have narrowed the field.