Reaction to racist rant shows GOP in thrall to extremists 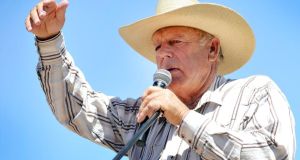 When a cranky anarchist in a cowboy hat starts a sentence saying “I want to tell you one more thing I know about the Negro”, you can be dang sure it’s going downhill from there.

The unsettling thing about Nevada rancher Cliven Bundy’s ugly rant on the Virgin River on Saturday, the New York Times ’ Adam Nagourney told me, was that there was no negative reaction from the semi-circle of gun-toting and conspiracy-minded supporters who had gathered round to hear it. The oblivious 67-year-old Bundy, who has refused for 20 years to pay for his cattle to graze on our land, offered a nostalgic ode to slavery.

Recalling that he saw African-Americans sitting on the porch of a public-housing project in north Las Vegas who seemed to have “nothing to do”, Bundy declaimed: “They abort their young children, they put their young men in jail, because they never learned how to pick cotton. And I’ve often wondered, are they better off as slaves, picking cotton and having a family life and doing things, or are they better off under government subsidy?”


Telling reaction
The man hailed as a “saviour” and “folk hero” by Fox News doubled down on Thursday, declaring: “Cliven Bundy’s a-wondering” if the black community was happier during slave days when “they was in the South in front of their homes with their chickens and their gardens and their children around them and their men having something to do”.

By Friday, he was saying that all Americans are slaves to the government and comparing himself to Martin Luther King jnr and Rosa Parks. Just another dark-ages bigot who goes nuts at the idea that whites are losing clout in an America run by a New Age black president. What’s the use of being white, after all, if you can’t be king of the hill – even if the hill really belongs to the government?

Conservatives saw no hypocrisy in rallying around Bundy for breaking the law, refusing to pay between $1 and $2 a month per cow to graze on federal land, while they refuse to consider amnesty for illegal immigrants committing Acts of Love.

Rand Paul, the libertarian senator from Kentucky who wants to be the Republican presidential nominee, took almost a day to distance himself from the self-immolating Bundy. Paul was so worried about alienating the segment of the party that will decide the nomination, he couldn’t even respond quickly to say the most simple thing on earth: Racism is bad.

As BuzzFeed reported, Chris McDaniel, a GOP state senator mounting a strong challenge to Thad Cochran in the Mississippi Republican primary, has written blog posts blaming the “welfare dependent citizens of New Orleans” for not finding higher ground during Katrina, charging that “Mexicans” entering the country are hurting “our culture” and calling racial profiling of Muslims a “victory for common sense”.

From cockfighting rallies to online gun sweepstakes to cracks about “wetbacks” to waxing nostalgic about slavery, the Republican fringe has gone mainstream. When the younger stars of the GOP race to embrace a racist anarchist lionised by Sean Hannity, it underscores the party’s lack of leadership or direction.


GOP in disarray
After making noise about reaching out to women (even as Senate Republicans unanimously blocked a vote on the Paycheck Fairness Act and Republican legislatures around the country pass more abortion restrictions), the GOP now has the delightful Det Bowers out there doing marital counselling. Politico reported that the wacky 62-year-old evangelical minister, who is challenging Lindsey Graham in the South Carolina GOP Senate primary, once asserted that 95 per cent of broken marriages are caused by women giving more attention to their children than to their husbands. “He did run off with some other woman, and you packed his bags,” said Bowers, adding: “You just ran him off. You paid more attention to your children than you did to him. ‘Oh, he doesn’t need me?’ He needs you more than they do. He chose you, they didn’t. An abominable idolatry.”

It’s a measure of how hallucinogenic conservatives are that they are trying to relitigate slavery during the second term of the first African-American president.


Reactionary revisionism
Earlier this month, Jim DeMint, Tea-Party godfather and president of the Heritage Foundation, bizarrely told a Christian radio station that it was not “big government” that freed the slaves, but “the conscience of the American people” and Abraham Lincoln, a Republican. (Umm, wasn’t he big government along with his hundreds of thousands of troops?)

In another case of inexplicable foot-dragging, Rand Paul was reluctant to cut loose Jack Hunter, his social media director and co-author on a Tea Party book, after the media wrote about his past life as a shock jock named the Southern Avenger who advocated secession, wore a Confederate flag mask, toasted John Wilkes Booth, and complained that whites are “not afforded the same right to celebrate their own cultural identity” because anything “that is considered ‘too white’ is immediately suspect.”

At Harvard’s Institute of Politics on Friday, Paul said that “the Republican Party will adapt, evolve or die.”

He might want to listen to his own advice.