Path to November election clearer for Clinton than Trump 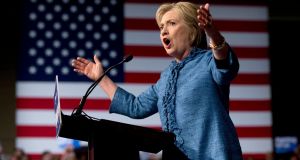 The third successive “Super Tuesday” state nominating contests in the US presidential election threw up two significant outcomes: Hillary Clinton will almost certainly be the Democratic nominee and Donald Trump would be the Republican nominee if based on a majority of voters.

The front-runners advanced further down to the road to meeting each other in November’s head-to-head match-up by clocking big wins in states with large numbers of delegates who will formally pick the candidates.

Clinton won by a huge 31-point margin in Florida, picked up Illinois, North Carolina and Ohio, and was stuck in a dead heat with Vermont democratic socialist Bernie Sanders in Missouri.

She answered niggling questions about her candidacy, showing that she could win voters outside her core base of black voters in at least parts of the midwest and appeal to as many white voters as Sanders.

Exit polls in Ohio, a key swing state in the general election, showed her winning 71 per cent of black voters and 53 cent of white voters in the industrial north, challenging Sanders’s advantage among these voters.

While confirming Clinton as the nominee now seems something of a formality, the victory by Ohio’s Republican governor John Kasich in his home state – his only victory out of 27 state contests to Trump’s 18 – put a potentially significant obstacle in front of Trump.

Trump’s huge win in Florida, beating local senator Marco Rubio by a crushing 19-point margin and ending Rubio’s presidential dreams, helped him bank 99 delegates, the night’s biggest haul. It pushed him past the halfway mark in the race for the 1,237 delegates needed for the nomination.

He will try to use this victory to propel him from a back-of- the-field position to challenge Trump and Texas senator Ted Cruz in later states so that he might figure in the pitchfork battle that the Republican National Convention is likely to be in Cleveland in July.

Trump again showed his appeal by winning over a large number of white, working-class voters with no college education – in Florida, Illinois and North Carolina. The race in Missouri was too close to call on the night with Trump and Cruz locked in a virtual tie on 41 per cent each.

At his Tuesday night victory party, Trump attempted to quell the party establishment’s opposition, pointing to the “millions” of voters his insurgent campaign has fired up.

“We have something happening that actually makes the Republican Party the biggest political story anywhere in the world,” he said.

Trump is right in that he has led a groundswell among the grassroots. In a sign that will worry Democrats for the general election, Republican turnout was up across the five states, from 21 per cent in Florida to 94 per cent in North Carolina, while Democratic turnout was down.

The Republican race could soon become about who is yet to run in the establishment’s bid to trump Trump.

Former Speaker of the US House of Representatives John Boehner endorsed his successor, Paul Ryan, the 2012 vice-presidential candidate, to become the nominee in Cleveland.

“Anybody can be nominated,” said Boehner, noting that if no candidate reaches 1,237 delegates, then it will be open season at the convention.

“If we don’t have a nominee who can win the first ballot, I’m for none of the above,” said the former Ohio congressman.

“They all had a chance to win. None of them won. So I’m for none of the above. I’m for Paul Ryan to be our nominee.”

Ryan has grown more circumspect in speaking about the possibility of being the anti-Trump parachute candidate.

“I haven’t given any thought to this stuff. People say, ‘What about the contested convention?’ I say, well there are a lot people running for president. We’ll see. Who knows,” he told CNBC TV on Tuesday night.

Imposing a new candidate over the heads of so many voters backing Trump poses a huge risk of fracturing the party.

Dumping Trump may prompt the billionaire to take his powerful electoral ball and run as an independent, which would undoubtedly give the Democrats a third straight presidential term.

Saving the party from a divisive billionaire may be a bigger prize for the establishment.

“I think you’d have riots,” said Trump when asked about the party picking another candidate if he fails to win the required delegates.

“I’m representing a tremendous, many, many millions of people.”