A portion of a 7,244-word statement, read by a news anchor, in which a victim of rape describes her ordeal, for which a Stanford University student received a six-month prison sentence - a ruling which has sparked outrage in the US. Video: CNN 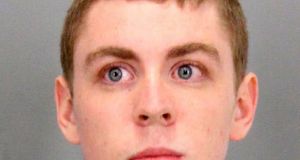 A sexual-assault case at Stanford University has caused public outrage after the defendant was sentenced to six months in a jail and starkly different statements were published online by his victim and his father, who complained his son’s life had been ruined for “20 minutes of action” fuelled by alcohol and promiscuity.

The case has made headlines since the trial concluded this year, but it seized the public’s attention over the weekend after a Santa Clara County Superior Court judge, Aaron Persky, handed the defendant, Brock Allen Turner (20) what many critics denounced as a lenient sentence, including three years’ probation, for three felony counts of sexual assault.

The next day, BuzzFeed published the full courtroom statement by the woman who was attacked.

The statement, a 7,244-word denunciation of the role of privilege in the trial and the way the legal system deals with sexual assault, has gone viral. By Monday, it had been viewed more than 5 million times on the BuzzFeed site.

One of those readings happened Monday on CNN, when the anchor Ashleigh Banfield spent part of an hour looking into the camera and reading the entire statement live on the air.

The unidentified 23-year-old victim was not a Stanford student but was visiting the campus, where she attended a fraternity party. In her statement, she described her experience before and after the attack by Turner, a champion swimmer.

The trial put Turner’s wellbeing over her own, she said, and in the end he was not punished severely enough because the authorities considered the disruption to his studies and athletic career at a prestigious university when determining his sentence.

If Turner and his defenders wanted to rebut her argument, a statement read to the court by his father, Dan Turner, and posted to Twitter on Sunday by Michele Dauber, a law professor and sociologist at Stanford, certainly did not help.

Turner’s father said that his son should not do jail time for the sexual assault, which he referred to as “the events” and “20 minutes of action” that were not violent. He said his son had suffered from depression and anxiety in the wake of the trial and argued that having to register as a sex offender was punishment enough.

Brock Turner also lost a swimming scholarship to Stanford and has given up on his goal of competing at the Olympics.

“I was always excited to buy him a big rib-eye steak to grill or to get his favourite snack for him,” Dan Turner wrote.

“Now he barely consumes any food and eats only to exist. These verdicts have broken and shattered him and our family in so many ways.”

In a statement, the Santa Clara, California, district attorney, Jeff Rosen, said the sentence “did not fit the crime”, and called the former Stanford student a “predatory offender” who had refused to take responsibility or show remorse.

“Campus rape is no different than off-campus rape,” Mr Rosen said. “Rape is rape.” In an editorial, the San Jose Mercury News called the sentence “a slap on the wrist” and “a setback for the movement to take campus rape seriously”.

Ms Dauber said Monday that she was part of a committee that was organising a recall challenge to Mr Persky, whose position is an elected one.

The professor said the judge had misapplied the law by granting Turner probation and by taking his age, academic achievement and alcohol consumption into consideration.

“If you’re going to declare that a high-achieving perpetrator is an unusual case, then you’re saying to women on college campuses that they don’t deserve the full protection of the law in the state of California,” the professor said.

Mr Persky did not respond to a request for comment sent to the Santa Clara County Superior Court on Monday.

Stanford University said in a statement on Monday that it “takes the issue of sexual assault extremely seriously” and that it was proud of two students who intervened to stop the attack.

“There is still much work to be done, not just here, but everywhere, to create a culture that does not tolerate sexual violence in any form and a judicial system that deals appropriately with sexual assault cases,” the statement said.