Orlando massacre: What we know about the victims 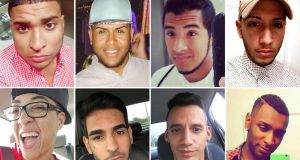 Thirty-three of the 49 victims of Sunday’s shooting have now been publicly named. The youngest was 19 years old, the oldest 50: they included a pharmacist, an employee of nearby Harry Potter World, a nursing student, the club’s bouncer, and dozens of sons, daughters, friends and partners.

- Luis S Vielma (22) worked on the Harry Potter ride at Universal Studios, according to author JK Rowling, who said she could not “stop crying” after hearing the news. Friends told the Orlando Sentinel that Mr Vielma was a “true friend”, and he had hoped to become an emergency medical technician. One, Olga Glomba, described him as “a funny, sweet, nerdy guy without a mean side. He just wanted to make people smile.”

- Edward Sotomayor Jr (34) was a brand manager at a gay travel company. He lived in Sarasota, Florida, and was described by his cousin as a caring and energetic man who often travelled to promote his company’s events. David Sotomayor told the Associated Press: “He was just always part of the fun.”

- Pharmacy technician Stanley Almodovar III (23) from Clermont, posted a Snapchat video of himself singing and dancing in the nightclub moments before he was killed. His mother, Rosalie Ramos, told the Orlando Sentinel she wished she had the video to “remember him forever”.

- Luis Omar Ocasio-Capo (20) described himself as a dancer on his Facebook account. Following the terrorist attack at the Bataclan theatre in Paris last year, he showed solidarity with the victims by adding a tricolour filter to his profile photo. A former teacher described him as a “ray of sunshine”, the Daily Beast reported.

- Telemarketer Juan Ramon Guerrero (22) had recently started college at the University of Central Florida. His cousin, Robert Guerrero, said he was an “amazing person” who was more likely to stay at home to care for his nieces and nephews than go out partying.

- After moving to Florida from Puerto Rico for the chance of a better life, Eric Ivan Ortiz-Rivera (36) a merchandise manager, was said to have “sacrificed himself a lot for his family”, the Orlando Sentinel reported. Abismel Colon Gomez, a former roommate of Mr Ortiz-Rivera, told the newspaper: “Eric was always willing to help everybody. He loved his brother, and he was always being generous.”

- Peter O Gonzalez-Cruz (22) worked for logistics company UPS in Orlando after graduating from Colonia High School. Originally from South Africa, Mr Gonzalez-Cruz’s cousins paid tribute to him on social media. One wrote: “Rest in peace to my wonderful cousin,” and another posted: “May you rest easy in Heaven.”

– Kimberly Morris, 37, worked as a bouncer at the Pulse nightclub. Originally from Connecticut, friends told NBC she had only moved to Orlando a few months ago. She had also lived in Northampton, Massachusetts, where she worked as a drag king and bouncer at the gay club Divas.

– Eddie Jamoldroy Justice, 30, an accountant who lived in Orlando, texted his mother Mina Justice to say he loved her and asking her to call for help as gunman Omar Mateen opened fire at the club. Trapped in a toilet, he desperately texted his mother and begged her to call the police, saying: “Hurry. He’s in the bathroom with us ... He’s a terror.”

– Anthony Luis Laureanodisla, 25, graduated from university in Puerto Rico before moving to Orlando. His family were said to have gone out searching for him after he failed to return home, local radio station Rumba said.

– Amanda Alvear posted a video of her night out at Pulse to Snapchat. Clips initially show her having fun with friends, but later on the sound of gunfire rings out loudly. Ashley Velez, sister of the 25-year-old Puerto Rican, said: “I love you baby girl. You were and will always be my baby sister. I’m so heartbroken ... You could make anyone’s day with the smile of yours.”

– Mercedez Marisol Flores was at Pulse with her best friend Amanda Alvear, who also died. The 26-year-old worked at the retailer Target and lived in the Florida city of Davenport. Josean Garcia said: “She was the one I fought with the most ... but somehow we understood each other. We did everything together.”