Oldest Irish society in US opens door to female members 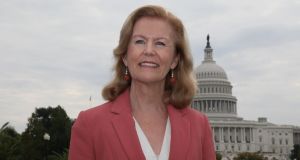 The Philadelphia chapter of the Friendly Sons will induct Irish Ambassador to the US Anne Anderson as the first honorary female. Photograph: Marty Katz

America’s oldest Irish society, the Friendly Sons of St Patrick, has agreed to admit female members for the first time when it marks its 245th anniversary in March.

The Philadelphia chapter of the Friendly Sons, the founding chapter, will induct Irish Ambassador to the US Anne Anderson as the first honorary female member at a St Patrick’s Day dinner.

The group’s president, Joseph Heenan, said the change was supported by more than 90 per cent of its members and the admission of women was “long, long overdue”.

The Friendly Sons has no plans to change the name of the 650-strong society to include “and Daughters” in its title.

Mr Heenan, who pushed for the vote to include women after becoming president in June, said a name change might follow in time.

“I know some may look at that and say, ‘isn’t that a little bit of a contradiction’. I would say that time will take care of that,” he said, pointing out that the Boy Scouts of America had many members who were men.

“I am delighted by this decision, especially as we approach the centenary celebration in 2016,” said Ms Anderson.

“It is a great moment to embrace and celebrate a more open and inclusive Ireland and Irish America.”

It is not clear whether other chapters, not affiliated with the Philadelphia group, will follow the organisation’s lead.

Opposition to change is strong among some groups but Philadelphia’s special founding status may encourage others.

The Philadelphia society was founded in 1771 to provide relief to newly arrived Irish immigrants. The group welcomed both Catholics and Protestants, and included signatories of the US Declaration of Independence and the constitution among its founding members.

Tánaiste and Minister for Social Protection Joan Burton was a guest at the Philadelphia society’s St Patrick’s Day dinner last March where the provost of Trinity College Dublin, Patrick Prendergast, was the speaker.