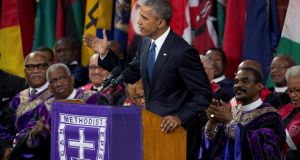 Thousands of mourners joined in song before US president Barack Obama’s eulogy for nine black churchgoers who were slain in a racially motivated attack in a black church.

The church’s choir, hundreds strong, led roughly 6,000 people in a medley of spiritual standards as the funeral began for the Rev Clementa Pinckney, the pastor killed in the attack.

State senator Gerald Malloy, Pinckey’s personal lawyer, promised to take care of his two daughters and keep pressing on issues Pinckney cared about, such as equitable healthcare and social justice.

Applause rang out as he noted how the slayings had suddenly prompted a re-evaluation of symbols that came out of the civil war and were used to assert white supremacy during the South’s segregation era.

“The Bible tells us to hope and persevere,” said Mr Obama, before going on to say while he did not know Pinckney well, they had met when they were both young – when Mr Obama had fewer visible grey hairs.

“The [Confederate] flag had always represented more than just ancestral pride,” he said, a remark that was greeted by great applause.

“For many, black and white, that flag was a reminder of a system oppression and racial segregation,” he added.

Removing the flag was not an act of political correctness, Mr Obama said, but a sign that the cause for which the Confederates fought, the cause of slavery, was wrong.