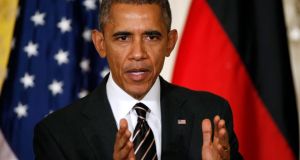 US president Barack Obama: “I am convinced that the United States should not get dragged back into another prolonged ground war in the Middle East,” he said. Photograph: Kevin Lamarque/Reuters

President Barack Obama has asked the US Congress to approve military force against Islamic State (IS) extremists, limiting action to three years and barring the use of US troops in “enduring offensive ground combat”.

Speaking at the White House, Mr Obama said that the three-year limit was not a timetable for action against IS but it would allow Congress to revisit the issue at the start of the next presidential term.

The resolution wasn’t seeking authorisation for another ground war in the Middle East, he said, but would give flexibility “for unforeseen circumstances” such as to attack IS leaders with special forces troops.

“I am convinced that the United States should not get dragged back into another prolonged ground war in the Middle East,” he said.

“It is not in our national security interest, and it is not necessary for us to defeat ISIL [another name for IS].”

On the three-year limit on authorisation for military action, Mr Obama said: “I do not believe America’s interests are served by . . . remaining on a perpetual war footing.”

The US military has been carrying out air strikes against the militant group which controls large parts of Iraq and Syria since August under congressional approval secured by George W Bush in 2001 and 2002.

Mr Obama has sent a letter to Congress seeking new authorisation for action. It would repeal Mr Bush’s 2002 measure that sanctioned the war in Iraq but leave in place the 2001 approval that allows the US president to take action against al-Qaeda and affiliated groups.

Mr Obama said he still intended to repeal the 2001 authorisation, a long-held aim for the president, but wanted specific approval to tackle the threat from IS, which is also known by the acronyms ISIS and ISIL.

The president, who campaigned against the US wars in Afghanistan and Iraq when running for the White House, set out plans in 2013 to take the US “off a perpetual wartime footing” by repealing the Bush-era laws, but has since used them to strike against IS.

In the letter sent to Congress, Mr Obama said that IS militants posed a threat to the people and stability of Iraq, Syria and the broader Middle East.

He referred to the deaths of American hostages journalists James Foley and Steven Sotloff and aid workers Abdul-Rahman Peter Kassig and Kayla Mueller, whose death, confirmed this week, adds new urgency to the authorisation being passed by Congress.

“If left unchecked, ISIL will pose a threat beyond the Middle East, including to the United States homeland,” said Mr Obama.

Flagged by the president in his state of the union address last month, Mr Obama’s request for authorisation must pass the Senate and House of Representatives where it will generate strong debate, particularly among Democrats who fear another protracted Middle East ground war following 14 years of conflict in Afghanistan and Iraq.

Those wars claimed 4,491 and 2,356 American military lives respectively, according to US department of defence figures.