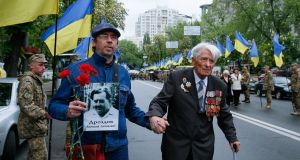 A Ukrainian man carries a portrait of a relative and helps a veteran before a march for Victory Day celebrations in Kiev, Ukraine. Photograph: Sergey Dolzhenko/EPA

Ukrainian police have arrested dozens of people during tense events to commemorate the Soviet victory over Nazi Germany, which are now an annual flashpoint as Ukraine tries to escape Russia’s grip and align with the West.

Officials said more than 30,000 police officers were deployed around Ukraine to monitor marches that attracted some 50,000 people. In the capital Kiev, 10,000 police were tasked with maintaining order ahead of the first semi-final of the Eurovision song contest on Tuesday evening.

In Russia, May 9th Victory Day celebrations have regained much of their Soviet-era pomp under President Vladimir Putin, who oversaw a parade of troops, tanks, missile systems and other armour on Red Square beside the Kremlin.

Following a 2014 revolution that ousted pro-Moscow leaders, however, Ukraine has sought to erase symbols of the Soviet years and Kremlin domination, angering some who still feel close to Russia or nostalgia for the communist era.

Scuffles broke out in several Ukrainian cities between people attending Victory Day events – some of whom carried banned communist flags or even symbols of Moscow-backed separatists fighting in eastern Ukraine – and nationalists who essentially regard the Soviet period as one of Russian occupation.

“The second World War ended 72 years ago, and the Kremlin is still trying to command Ukraine like the four Ukrainian frontlines of the 1940s,” Ukrainian president Petro Poroshenko said at a commemoration in Kiev.

He also accused Russia of trying to co-opt the glory of the multinational Soviet forces “to meet its revanchist, imperial and expansionist needs” and insisted that Ukraine “will no longer commemorate (victory) according to Moscow’s script”.

Mr Poroshenko paid tribute to Ukraine’s veterans and those “who in their declining years are fated to endure yet another war, yet another aggressor and yet another occupier” – a reference to a three years of fighting in the east that has killed some 10,000 people and displaced about 1.5 million.

“We will certainly win,” he added. “It is our sacred debt before the dead of the second World War and those heroes of our time who gave their lives for a free Ukraine.”

In the main separatist-held stronghold of Donetsk, a military parade featured tanks, artillery and other military vehicles, many of which are banned from the city under an ineffective peace agreement.

As in Soviet days, Red Square hosted a vast display of the Kremlin’s military might, with heavy armour and high-tech missile systems rolling by in the company of more than 10,000 troops.

“We are open for such co-operation,” he added, “and Russia will always be on the side of forces for peace.”