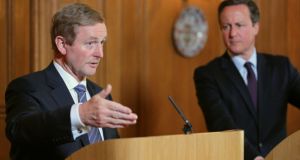 Taoiseach Enda Kenny (left) with British prime minister David Cameron during a press conference at 10 Downing Street in London. Mr Kenny expressed surprise and disappointment at the tone of the article written by the New York Times on the Berkeley tragedy that portrayed Irish students on J1 visas in the United States in a negative light. Photograph: Chris Radburn/PA Wire. 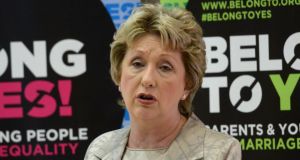 Former president Mary McAleese has said the New York Times journalists who wrote a controversial article on the Berkeley balcony collapse demonstrated a “sociopathic dissociation” from the suffering of family members of the dead and injured. Photograph: Dara Mac Donaill/The Irish Times.

Taoiseach Enda Kenny has expressed surprise and disappointment at the tone of the article written by the New York Times on the Berkeley tragedy that portrayed Irish students on J1 visas in the United States in a negative light.

Asked to comment on a letter written by former president Mary McAleese to the newspaper criticising the article, Mr Kenny said he fully supported her sentiments.

Mr Kenny echoed Ms McAleese’s criticism of the media organisation’s coverage, saying he was surprised that “ such an eminent newspaper” would write an article like it.

“They know well the impact and value of J1 visas and the extraordinary opportunity it gives to so many thousands of young Irish people over the years to go to the US to understand the bigger world out there and the excitement it creates,” Mr Kenny said.

“This is a tragic incident and I was very surprised and disappointed to see the tone of the article written by the New York Times, surprised at them.”

At a joint press conference held after meeting Mr Kenny in Downing Street, British prime minister David Cameron prefaced his remarks by expressing sympathy to relatives and friends of those who had died or had been injured in the accident.

Ms McAleese said the The New York Times journalists who wrote the article on the Berkeley balcony collapse demonstrated a “sociopathic dissociation” from the suffering of family members of the dead and injured.

In a letter sent to the newspaper, Ms McAleese said the New York Times “should be hanging its head in shame” following a report which termed the J1 visa exchange programme an “embarrassment to Ireland”.

While acknowledging it is unlikely that the offending material will be taken down from their website, she added that complaints received by the newspaper’s public editor Margaret Sullivan, as well as subsequent apologies issued by the New York Times itself, should be prominently linked to the original story.

“It’s so insensitive that I would say it is almost dissociated from any sense of human empathy or human feeling, or a sense of human grief,” she told RTÉ Radio on Thursday.

“In this moment of intense grief, these journalists- and it was a team of journalists- they cut and paste these most awful stories which represented the most minute minority,” she said of references to troublesome parties involving J1 visa holders which were included in the article.

A J1 visitor to San Francisco herself in 1971, she termed it “journalism at the absolute worst end of the spectrum; it’s indescribably poorly-constructed in every way”, and remarked that it would have been more appropriate for the journalists to focus on the structural integrity of the balcony itself.

Commenting on the six students who died and seven who were injured during the incident on Tuesday, Ms McAleese extended her sympathies to the families of the “fabulous young people who had already accomplished so much in very short lives and are a credit to our country.

“They had their whole lives in front of them, but they also had wonderful lives behind them... They had a catalogue of things accomplished that their parents could only have taken pride in.”

Speaking this morning, New York Times public editor Sullivan said that while the piece in question was “insensitive”, it would most likely not be removed from the website.