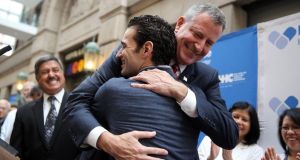 A New York doctor who has recovered from Ebola left the hospital today and urged support for US health workers treating patients in west Africa so they do not face “stigma and threats” when they return home.

The discharge of Dr Craig Spencer (33), who worked with Ebola patients in Guinea and had been held in isolation at Bellevue Hospital Centre since he was diagnosed with the virus on October 23rd, means no one in the United States is being treated for the disease.

Looking gaunt but happy, Dr Spencer high-fived Bellevue nurses and was hugged by New York City mayor Bill de Blasio, the city’s first lady Chirlane McCray and a handful of other officials at a news conference before his release.

“My infection represents a fraction of the more than 13,000 reported cases in west Africa, the center of the outbreak,” said Dr Spencer, a physician from NewYork-Presbyterian/Columbia University Medical Center who worked overseas with Doctors Without Borders.

“Please join me in turning our attention back to west Africa and ensuring that medical volunteers and other aid workers do not face stigma and threats returning home,” said Dr Spencer, who lives in an apartment in Harlem.

A handful of US states have imposed mandatory quarantines on health workers returning from three Ebola-ravaged west African countries, Guinea, Liberia and Sierra Leone, while the federal government is wary of discouraging potential medical volunteers.

Dr Spencer’s diagnosis followed trips on the subway to eat out and go bowling with friends, provoking public alarm about the possible spread of the virus.

Ebola has killed more than 4,950 people since it broke out in west Africa earlier this year, according to the World Health Organization.

In North Carolina, health officials said on Monday that a missionary, Dr John Fankhauser (52) of Ventura, California, was deemed to be at “some risk” for developing the disease after returning from Liberia and had been placed under a 21-day quarantine.

There has been only one Ebola death in the United States – Thomas Eric Duncan, who contracted the disease in his native Liberia and died during a visit to Dallas.

Medical experts say Ebola can be transmitted only through the bodily fluid of a person who is exhibiting symptoms. – (Reuters)