New York state in the United States declared an emergency on Monday as a huge blizzard slammed into the northeast part of the country, bringing havoc for millions of people with heavy winds and snows. Video: Reuters 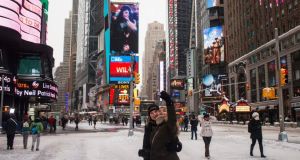 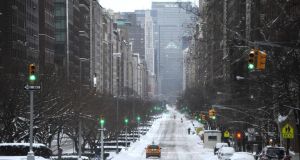 A view down a nearly deserted Park Avenue during what is normally a crowed morning rush hour. Photograph: Stan Honda/AFP/Getty Images

New York City, which was shut down overnight, was spared the worst of a snowstorm that swept across the Northeast early Tuesday and slowly returned to its normal rhythms as travel bans were lifted and transit services gradually restored.

But even as buses and trains began to move again, the widespread closings left the city virtually deserted in the early morning hours. Grand Central Terminal was deserted, Times Square was quiet and the streets of Lower Manhattan were largely empty of financial workers.

Subway service was scheduled to start at 9 am and slowly resume operating on a Sunday schedule. Governor Andrew M Cuomo, speaking at a press conference in Manhattan, said that the lessons of past storms is to “lean towards safety.” He defended the decision to close streets and stop subway service, saying that they will now be able to get roads cleared and restore service faster than if they had not shut things down.

“I would much rather be in a situation where we say we got lucky than one where we didn’t get lucky and somebody died,” he said. “We respond to the best information that we have.”

Mayor Bill de Blasio, appearing on CNN, said that the decision to completely shut down the city was the right one, even if the forecasts did not turn out to be accurate. “This is a better safe than sorry scenario,” he said, noting that meteorologists were calling for more than 2 feet of snow in the city late into the evening. “Two feet of snow would have paralysed this city.We dodged a bullet,” he said.

The National Weather Service acknowledged that the predictions had been off-target: “Rapidly deepening winter storms are very challenging to predict, specifically their track and how far west the heaviest bands will move,” it said as it updated its forecast. “These bands are nearly impossible to predict until they develop.

“Our science has come a long way, but there are still many moving parts in the atmosphere, which creates quite the forecast challenge.”

The weather service said that the storm had moved further east and that “much less snow” would fall near the city than previously predicted.

The situation on the eastern end of Long Island, parts of Connecticut and the New England coast was more difficult, with winds as high as 77km/h measured at Montauk point and snow continuing to fall.