National Guard to pull out of Ferguson as tensions ease 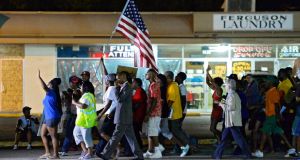 Missouri’s governor has ordered National Guard troops to withdraw from the riot-weary town of Ferguson as tensions ease after nearly two weeks of racially charged protests over the fatal police shooting of an unarmed black teenager.

Last night was the calmest in the St Louis suburb since 18-year-old Michael Brown was gunned down by a white police officer on August 9th under disputed circumstances.

Even as scores of boisterous but peaceful protesters returned to the streets, Mr Brown’s father, Michael Snr, urged them during a CNN interview “to go back to your regular life.”

He expressed gratitude for the outpouring of support but criticised thugs and outside agitators who police have blamed for much of the lawlessness that accompanied earlier protests.

“This looting, all this other stuff...it’s not helping our boy. It’s doing nothing but causing more pain, plus it’s shaming his name,” Mr Brown’s father said. “Go back home to your family...Hug your kids. Hold onto them tight. Keep them close.”

Ferguson erupted in anger after the teenager’s death, with nightly rallies frequently punctuated by looting, vandalism and clashes between protesters and heavily armed riot police, often ending in volleys of tear gas and dozens of arrests.

The turmoil has cast the community of 21,000 people into the international spotlight as an emblem of often-troubled US race relations.

With civic leaders and clergy urging protesters in recent days to maintain order and leave the streets after dark, crowds have grown thinner in number and have become more subdued.

Last night, Capt Johnson and many of his officers mingled casually among protesters. The police presence was generally more low key than it had been since Mr Brown was shot, but the night was not without incident.

Police made a number of isolated arrests of people suspected of instigating the earlier unrest, and tensions heightened briefly as protesters clamoured around arresting officers, before members of the clergy members moved in to calm the crowd.

National Guard troops, who were deployed to Ferguson to assist police at the height of disturbances but have kept a relatively low profile during demonstrations, were ordered by Governor Jay Nixon to begin pulling out of the community.

“We continue to see improvement,” Mr Nixon said in a statement.

A local grand jury met on Wednesday to begin hearing evidence in the case, a process that St Louis County prosecuting attorney Bob McCulloch said could last into mid-October.

Mr Brown’s family and protesters are demanding that the probe be turned over to a special prosecutor, saying Mr McCulloch has a record of discriminatory handling of cases involving police accused of misconduct against blacks.

Mr McCulloch, whose father was a police officer killed in the line of duty by a black man, has promised a fair and impartial investigation. State Senator Jamilah Nasheed arrived at Mr McCulloch’s office yesterday with petitions calling for his removal from the case.

“I am here to deliver a message to Bob McCulloch that the people do not have any confidence in him,” Nasheed said. “The people’s opinion is that he totally has no ability to do the right thing.”