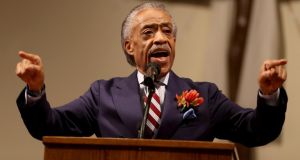 The governor of Missouri, Jay Nixon, yesterday effectively blamed the local police chief in Ferguson for the renewed violence in the city at the weekend after the fatal shooting of an unarmed teenager by a patrol officer a week earlier.

Mr Nixon condemned the release by the local Ferguson force on Friday of security camera footage and a police report that implicated Michael Brown (18) in a petty theft at a convenience store a few minutes before he was shot dead. The US department of justice, which is leading a civil-rights investigation into the killing, also made it clear it had opposed publication of the pictures.

“I think it had an incendiary effect,” Mr Nixon said in an interview on CBS’s Face the Nation. “When you release pictures and you clearly are attempting to besmirch a victim of a shooting, shot down in his own street, a young man, and at the same time you’re releasing information to tarnish him, then properly, there was a lot of folks that were concerned about that, and I do think it flamed it back up and has caused us to have to deal with some of that.”

The recriminations flew after police were forced to fire tear gas at a core of demonstrators who had refused to obey a midnight curfew imposed by Mr Nixon on Saturday in an attempt to restore order in the town, which has been rocked since the teenagerwas shot on August 9th by a Ferguson police officer, Darren Wilson.

Making the rounds of the US talk shows, Mr Nixon expressed concern about the release by the Ferguson police of the surveillance footage and police report, at the same time as the officer involved in the shooting was named. Asked on ABC’s This Week whether he knew or approved of the release, he said: “We were unaware that they were going to release it and we certainly weren’t happy with that being released, especially in the way that it was.”

“I disagreed deeply. To attempt to disparage the victim, well it’s just not right and it put the community on alert again,” he told NBC.

Earlier in the week, Mr Nixon had replaced the St Louis county force with a commander from the Missouri state highway patrol, Cpt Ron Johnson, an African American who grew up in Ferguson. Vi olence flared again on Friday after the release by Ferguson police chief Thomas Jackson of the information that implicated Brown in the robbery.

The governor drew a direct link between Jackson’s actions and the renewed violence: “It made emotions raw and one of the reasons why that second night, we saw folks getting upset,” he told ABC. – (Guardian service)